Sam Worthington possesses a stillness that makes him a fitting protagonist for movies where kinetic, computer-generated nonsense swirls around him. Whether he's leading a team of Na'vi warriors across the battlefield in Avatar or fighting off the freshly unleashed Kraken in Clash of the Titans, he's completely nonplussed. He makes having sex with a tail look like the most natural thing in the world. In more conventional films, that vacant stare can be a liability. But in a spectacle-driven blockbuster, it's an asset.

Unfortunately, Netflix's latest original thrillerThe Titan, which arrived on the platform today with the scant promotional fanfare we've come to expect from the streaming company, is not the type of overblown, special effects driven extravaganza that Worthington excels in. Instead, the debut feature from director Lennart Ruff is an "elevated" science-fiction tale set in a dystopian 2048 version of Earth ravaged by population growth, environmental decay, and constant war. It's a drab, rudderless movie that calls on its star to splice some life into the reanimated DNA of more thoughtful, original fare like The Fly or Annihilation. Sadly, Worthington isn't up to the task and the experiment eventually goes haywire. 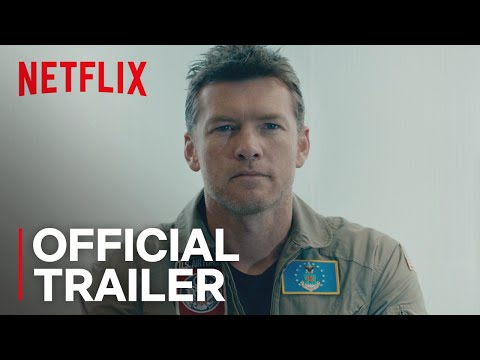 It takes at least an hour for the lab results to show up negative; the opening section of The Titan actually has a brisk, highly watchable quality. Against the backdrop of global upheaval and economic despair, screenwriter Max Hurwitz, working from a story by Grace of Monaco writer Arash Amel, takes us into a secluded military community that considers itself humanity's last hope. Former Air Force fighter pilot Rick Janssen (Worthington) gets recruited for a special assignment that will make him one of the first humans capable of living under the life-threatening atmosphere of Saturn's moon Titan. Tom Wilkinson's Professor Martin Collingwood, the resident labcoat-wearing-blowhard, explains that he's "evolving humanity into the stars." It's all very Michael Crichton-ey.

To begin this evolution, Rick undergoes some intense drug therapy that will remind Netflix junkies of the doping scenes in the company's Oscar winning documentary Icarus. (Worthington even gets a shot in the ass at one point.) Between his regiment of lectures, injections, and underwater breathing exercise, Rick also spends time with his concerned wife Abi, a pediatrician played by Orange is the New Black star Taylor Schilling, and his cute son Lucas, who likes to fire up up a fancy-looking solar system night light before he goes to bed every night. Despite the bleak state of the world, the domestic environment portrayed in these home scenes has a pleasant, Ikea catalog vibe. The whole movie feels like it's been dipped in an antiseptic.

Things must get a little smudged and dirty eventually, right? Don't hold your breath -- unless you've also developed Worthington's mutant skills. The Titan's slow-burn, artisanal approach to body horror would be admirable if Ruff had a stronger grasp on the tortured psychology of the characters and the pulpy demands of the genre. Specifically, the script lacks the sexual dimension that drives the best David Cronenberg works. There are hints of a steamier movie here -- during an intimate late night swim, Abi notices Rick's back is extra vein-ey -- but the pot never boils.

Maybe the blame rests on Worthington's broad, action-movie-ready shoulders. Instead of playing the part of Rick with a degree of intensity or danger, he remains his normal passive self, mostly just observing his rapidly mutating form with a puzzled look on his face. At one point it's implied he has a physical connection with one of his fellow test subjects, played by Game of Thrones break-out Nathalie Emmanuel, but the movie is too chaste to follow the impulse. Everything must remain clinical. Don't disturb the lab rats.

That dutiful, checking-all-the-boxes approach becomes especially draining as the movie chugs along to its violent, abrupt finale. By the time Worthington is peeling off large chunks of his skin like Mike Myers in Goldmember, it's hard to feel invested in his journey because his motivations, beyond a sense of duty and a heroic desire to save the world, remain so opaque. If you're going to make a stylish, cerebral science-fiction film, it helps to have an actual concept that's worthy of the stripped-down, chin-stroking approach.

Schilling, who replaced the originally attached Ruth Wilson in her role, gets closer to locating what's potentially interesting about this material as a metaphor. She's terrified for her husband, watching his body change and wondering if he's going to remain the same person. Will he still be the same man she loves with alien muscles and gills? Can she learn to co-parent with a humanoid that looks like one of the Engineers from Prometheus? What's it like to have sex with a Titan? The movie isn't interested in exploring these questions. It doesn't want to seduce you. It wants to put you to sleep.