Netflix Anime 'The Way of the Househusband' Is Hilarious

A former yakuza boss gives up a life of violence for the comforts of domesticity.

There are few things in this world funnier than watching an otherwise extremely scary individual being forced to do something mundane. That is the exact form of comedy that Netflix's new slice-of-life anime series The Way of the Househusband is predicated on, and it's uproariously funny every single time.

The Way of the Househusband, based on the manga series by Kousuke Oono, and starring Kenjiro Tsuda (who also voiced the main character in promotional videos for the manga), is about Tatsu, a.k.a. the Immortal Dragon, a former yakuza boss with a terrifying reputation who has chosen to give up his life of crime and become a stay-at-home husband for his career-oriented wife Miku. But his skills with various weapons, his quick thinking, and his intimidating demeanor all manage to come in handy even in domestic life. Tatsu, tall with full back tattoos and facial scars, cuts a frightening figure, but cares more about carefully preparing his wife's bento lunches and getting good deals at the supermarket than about his former gang colleagues who keep hounding him to return to the fold. Also, he wears a little apron. 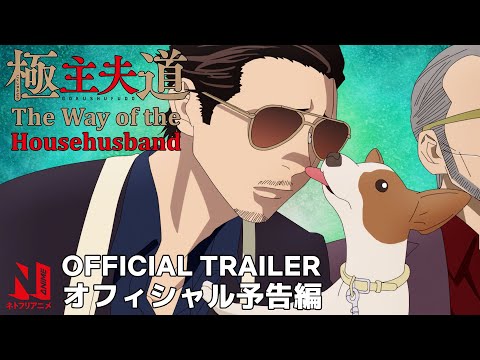 The episodes are short and lightning-fast, fitting about five or six mini-stories into a single installment, usually focused on Tatsu going to an aerobics class and scaring everyone with his rictus smile, or using his skills with the blade to test out a salesman's kitchen knives. In the first episode, he fights off some former rivals with a pair of fuzzy mittens he got in a sale, aces a cooking class, and then prepares a cozy birthday party for his wife. Every episode also features an interlude with Tatsu and Miku's cat Gin, who goes on daily walks and gets into trouble with the neighborhood animals.

The Netflix anime, which was directed by Chiaki Kon and produced by animation studio J.C.Staff (Food Wars!, the tonally similar The Disastrous Life of Saiki K., One-Punch Man), pretty faithfully adapts the manga's source material (as does the 2020 live-action adaptation), at times remaking scenes, such as the one in which Tatsu gets a new apron printed with the characters of his wife's favorite anime, almost frame-by-frame. It's breezy, it's fun, and it'll make you wish you had a live-in former gangster to cook all your meals for you.