At least Lauren Lapkus is along for the ride.

In comedies like Tommy Boy and Black Sheep, former SNL cast member David Spade played the caustic, smart-ass straight-man to Chris Farley's more manic, wild-eyed force of nature. As a pseudo-sidekick and metaphoric babysitter, his job was to get exasperated by Farley's antics and eventually warm up to the guy, discovering that he was actually a lovable man-child all along and, in the case of Tommy Boy, a decent brake-pad salesman. Crucially, both those movies understood that Farley was the main attraction and the primary point of entry for the audience, the figure we were rooting for despite (or because of) his often obnoxious behavior.

Spade's new Netflix movie, The Wrong Missy, a Happy Madison-produced romantic comedy that takes place during a corporate retreat in Hawaii, attempts to pull off a similar trick with often shaky results. As bland corporate drone Tim Morris, a guy who loves The Affair and the novels of James Patterson, Spade is forced into everyman mode with only a handful of his jerkier tendencies rising to the surface. In the opening scene, there's a misunderstanding at a restaurant bar and Tim almost gets his ass beaten by WWE pro wrestler Roman Reigns, one of a handful of "huh" cameos, but it ends up being a prank played on him by Missy (Lauren Lapkus), the woman he was supposed to meet on a blind date set up by his grandma. The two don't connect: Missy slurps wine from a pigtail that falls in her wine glass, chases Tim into the bathroom, and pulls out a large knife she's nicknamed Shelia. No second date. 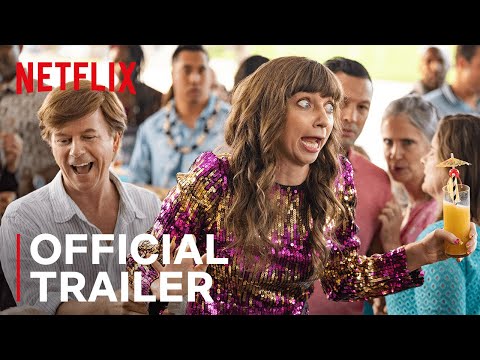 Three months later, Tim has a meet-cute-like run-in with a woman at an airport (Molly Sims), accidentally switching bags in a coincidence that leads to them both missing their flights, and the two hit it off. (They share a love of Patterson novels and they've both been cheated on in previous relationships.) She's also named Missy and Tim gives her his phone number. Soon, he's texting with her, with plenty of crass encouragement from his boorish co-worker (Nick Swardson, doing lots of Nick Swardson stuff), and invites her on an upcoming corporate retreat in Hawaii. Only, when he gets on the plane, Tim discovers that he accidentally invited -- yet, you guessed it -- the wrong Missy, meaning Lapkus.

All these plot mechanics, which are handled with a degree of finesse by writers Chris Pappas and Kevin Barnett (The Do-Over), are just a way to set up the island vacation that will take up the rest of the movie. Forced to spend time with Lapkus' wild Missy, who calls him her "soul mate" and her "savior," Tim struggles to maintain control of his life while soaking up all that island sun. He's gotta suck up to his uptight boss (Geoff Pierson) and not alienate the ex-fiancé he still has feelings for (Sarah Chalke), who is currently dating one of Tim's more irritating co-workers (Chris Witaske). Basically, there are plenty of opportunities for Missy to make Tim's life a living hell.

Luckily, Lapkus is up to the challenge. While she's had small roles on popular shows like Orange Is the New Black and in blockbuster movies like Jurassic World, the sketch and improv veteran is perhaps best known to comedy fans for her frequent appearances on freewheeling podcasts like Comedy Bang Bang and With Special Guest Lauren Lapkus, where she would play one of her many endearingly strange characters. She specializes in playing deeply troubled people who also have a disarming sweetness to them. With her mix of misplaced social confidence and manic charm, Missy is right in her bizarre wheelhouse, and, when the movie acts as a star vehicle for Lapkus, it can be very funny. When she's slamming shots at a rowdy party, eating rose petals in a hotel bathtub, or even jerking off Spade in his sleep on a plane, the character works. She's right for Missy.

The movie built around Missy isn't as sure of what to do with her, so we get a handful of elaborate set-pieces that simply drag on and on, like a big physical comedy gag where Missy falls off a cliff, a gross-out sequence involving Rob Schneider and vomited-up fish chum, and a shadow-dancing performance where lemons are shot out of someone's butt. (The shadow-dancing is at least surprising.) Inevitably, Spade's Tim wises up and realizes Missy is actually perfect for him, allowing for the movie to fumble its way through even more romantic comedy beats. Like in the Farley movies that made him a household name in the '90s, Spade's character learns to love the oddball he's been teamed up with. You just might not have the patience to watch him arrive at that realization.