This article contains spoilers for the first episode of HBO's The Young Pope. It also contains photos of Jude Law wearing pope garb. Proceed with caution.

The Young Pope, HBO's latest high-profile series, opens with Jude Law's title character emerging from a pile of dead babies. That's an odd way to start a TV show, but it's not even the strangest moment in this beguiling papal melodrama. No, that probably comes when the studly new leader of the Catholic Church demands a Cherry Coke Zero. That's God mode.

Beginning with a nearly wordless seven-minute dream sequence, The Young Pope is obviously not your average Sunday night prestige drama. The miniseries, from writer and director Paolo Sorrentino (The Great Beauty, Youth), is already a massive hit in Italy and has become a sanctified meme-machine in the weeks leading up to its premiere. But is this occasionally ponderous and chin-scratching show worthy of your steady devotion? Or will it have you falling asleep like a lapsed Catholic trying to make it through Sunday mass? Here's a quick catechism of what you need to know before you kiss the ring of this heavily-hyped new series. 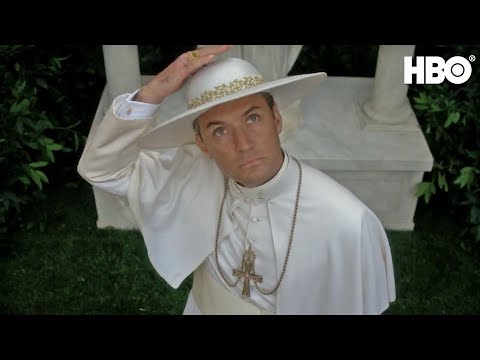 What makes this young pope so special?

Yes, this pope is young for a pope, but that doesn't mean he's young for a human. Judging from some partial nudity in the first episode, the Supreme Pontiff being played by the 44-year-old Jude Law has a supremely toned butt, but don't let the show's title fool you: this isn't The Millennial Pope. He's not replacing the Communion wine with La Croix or swapping out the papal Mitre with a hat from Supreme. But The Generation X Pope probably doesn't fit on posters.

No matter his age, Law's Pope Piux XIII -- an orphan named Lenny Belardo from Brooklyn -- is a bit of a paranoid, reactionary jerk. After the show's dreamy opening, which includes a fiery speech from Lenny about taking the Church away from some of its conservative principles, we see a series of scenes where the new pope teases, embarrasses, and humiliates the spiritual leaders around him as he goes about preparing for his first major address to the public. He doesn't suffer fools -- or elaborate breakfasts.

Luckily, he has some of his own people around to help him. The curious nun who raised him (played by a stern but playful Diane Keaton) arrives to provide guidance. His mentor Cardinal Michael Spencer (James Cromwell) lurks in the background. If this sounds a bit like The West Wing set in the Vatican, rest assured that it's not. Besides a few scenes of Cardinals bickering, the show doesn't seem to be especially interested in explaining how exactly someone as young as Lenny became the Young Pope. He just did.

"I'm a contradiction like God," says Lenny, and the series around him is no less perplexing. Sorrentino, who directed every episode, knows how absurd some of this material is -- and so does Law -- and together they lean into the ridiculous pomp, garish pageantry, and winking excess of the Catholic Church with an often intoxicating swagger. Occasionally, they over-step -- a moment in the pilot where Lenny lights a cigarette and says, "There's a new pope now," feels like a bad Twitter joke brought to life -- but for the most part they keep from falling into self-parody. At the very least, there are no popemobile jokes in the first episode.

How out there does it get?

The experience of watching The Young Pope can be bewildering. At times, the show feels like a garish pop art cartoon: it's all bright colors, tightly composed frames, and large expressive faces. (Italian actor Silvio Orlando plays a scheming Cardinal with a giant mole on his face who looks like he emerged from a children's book.) Its cheeky mix of the sacred and the profane owes more to Madonna's "Like a Prayer" video or Kanye West's Yeezus than, say, the austere profundity of Martin Scorsese's Silence or the transcendental cinema of Robert Bresson. It's more interested in religion as theater than as gospel. You can imagine Lenny saying "hurry up with my damn croissants."

Are we supposed to take all this seriously or is it all a sly provocation? In the same way Sorrentino is vague about his larger thematic ambitions, Lenny is appropriately mysterious about his own goals as Pope. Despite the first episode's fleeting references to topics like gay marriage, abortion, and economic inequality, the show often treats power as an aesthetic rather than a political tool. Lenny remains an existential enigma.

At one point, Lenny tells another priest he doesn't believe in God, but he quickly negates his statement with a quick "I was joking." It's not terribly convincing. Sorrentino takes a similar approach to storytelling, staging bizarre scenes and then revealing they were only dreams or fantasies. You laugh. You shake your head. You wonder what the hell you're seeing -- but you never look away. You're too busy watching the throne and the young pope who sits on it.

Dan Jackson is a staff writer at Thrillist Entertainment and he's all about the popemobile. He's on Twitter @danielvjackson.