In tennis, an "ace" is when the serve is so perfect that no mortal can even touch it, let alone volley it back. You can find such perfection in all of life's endeavors, even movie casting: Getting Shia LaBeouf to play the part of young John McEnroe in the film Borg/McEnroe, which just had its world premiere at the Toronto International Film Festival, is one such ace. It doesn't mean the whole match is won, but it's something so impeccable that it simply cannot be topped. It's the part he was born to play.

Just in case you don't know who John McEnroe is, he's the man who scandalized my entire family (grandparents, too!) by shouting the F-word on television. I remember it clearly, because my older sister and I repeated it, and even though my mother yelled at us to stop, she was secretly laughing.

Mom kinda dug John McEnroe, but the rest of the tennis world sure didn't. He was the epitome of the crass New Yorker whose loudmouth attitude sullied the so-called gentlemanly demeanor of the sport. Part of his process was to scream at the umpire (a pointless act) and even to bray at spectators. He was uncouth and irresponsible, but even if you loathed him, you couldn't deny his talent. As the trailer for Borg/McEnroe makes clear, his personality was the perfect foil for his archnemesis, Björn Borg: 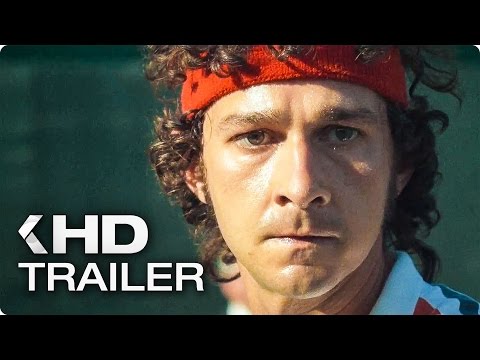 I won't go so far as to call Shia LaBeouf one of the essential film actors of our day, but the guy definitely has presence. Sure, for a while it looked like he was just there to play second fiddle to enormous talking cars, but his non-Michael Bay work (Lawless, Fury, American Honey) proved that he had acting chops, even if only hardcore film buffs saw those movies.

Like McEnroe's seemingly self-sabotaging tussles with the scorekeepers, LaBeouf has antagonized the public and the press. He was caught plagiarizing a comic for a short film he directed, and his apology was so over the top (renting out a skywriter) that it was evident he wasn't truly sorry at all. Then he wore a bag over his head at the Berlin Film Festival. Then he got into performance and political art. Then he showed up drunk at a bowling alley, screaming about french fries.

Shia LaBeouf never misses an opportunity to make sure you won't want to like him... until he gives a performance like the one in Borg/McEnroe. Publicly, McEnroe is yelling about the pigeons being too loud during a match at Wimbledon; privately, he's freaking out because the superficial media refuses to discuss his obvious tennis skills and just wants to talk about his tantrums.

There's a remarkable feedback loop happening with LaBeouf and McEnroe, and the push-pull of likability/disgust is the best thing about this movie. The problem is that the film's primary focus isn't on him: it's on Sverrir Gudnason's performance as the cool, near-robotic Borg. (The “Iceborg” as one commentator calls him.) While the movie includes flashbacks to both athletes' childhood and adolescence, the big finish is the 1980 Wimbledon match in which McEnroe threatens to prevent Borg from winning a record fifth consecutive title.

The movie is very much on Borg's side, and by extension supports his rigid, precise, and emotionally constrained style of play. This is no doubt a good lesson and all, but makes for some very boring filmgoing. Which is why, with whatever new struggle Shia's got, we're always rooting for him in the rematch .