There's one type of story that often gets told about cartels. It's the one you see in Narcos and Sicario, which glorify charismatic drug lords and the men and women trying to take them down. It's not the one in Tigers Are Not Afraid, the devastating horror-fantasy that arrived in select theaters last weekend. Issa López's Guillermo Del Toro-approved film tells a different kind of narrative, one that focuses on the orphans of the drug war, adrift in an inhospitable city.

"We have Narcos and we have Latin American soap operas about drug lords and we have fun drug lords in Breaking Bad," López says one afternoon in Thrilist's New York office. "All that content is fantastic, but it's doing a terrible disservice by creating an increasing fascination with the figure of the dealer and not the results of their activities. Children are a perfect perfect theme to go into the magical supernatural in general."

López spent years writing and directing Mexican comedies before she settled in Los Angeles where she watched project after project fall through. Realizing she hadn't shot a movie in seven years, she says she was "desperate" when she sat down to write Tigers. Always a "massive geek," she was inspired by films like District 9, which uses alien invasion as an allegory for apartheid in South Africa. "Can we do this in Latin America?" she says. "It didn't come to me that quickly... but then it was like, of course, violence right now is our apartheid."

Tigers Are Not Afraid centers on Estrella (Paola Lara), who the audience first sees in her grade school writing a fairy tale for a class assignment. Soon after, gunshots ring out and she and her classmates are forced to drop to the floor. As all the children cower, Estrella's teacher reaches out and hands her three broken pieces of chalk, telling her they represent three wishes. When Estrella leaves her school, she sees a dead body outside, and that's when a thin line of blood starts trailing her all the way back to her own home where her mother has gone missing. In her solitude, Estrella learns there is something supernatural in her orbit, but what exactly that is does not become clearly defined until the movie's last act. Terrified and alone, Estrella joins up with a group of other parentless children, lost boys led by El Shine (Juan Ramón López), squatting on a rooftop nearby.

Shine has stolen an iPhone with compromising information about a gang leader on it that makes him and his friends the target of a violent cartel, the Huascas, forcing the group of kids on the run. As Tigers Are Not Afraid progresses, the action simultaneously becomes more surreal -- a plush tiger comes to life, as do the dead -- and more upsettingly grim. Unlike some of the kid-focused adventure stories that López cited, like The Goonies, young lives are actually at risk in her work.

"It was very important to convey the feeling that nobody is really safe," she says. "At the same time that I give you hope and peace, at the end you need to walk out of the theater knowing this is happening. In a way, this is part of why children are willing to cross the border in spite of what they know what might happen on the other side. This is why parents will take their kids, leave their lives behind, and cross the border into uncertainty and now into imprisonment and unimaginable horrible situations -- because it's better than what happens there. And you need to tell their stories for the rest of the world to understand."

López shot the film in 2015 and it premiered at Fantastic Fest in 2017, but it arrives on American screens at a time when children from Mexico and other Latin American countries seeking asylum at the US border have been separated from their families and subjected to inhumane conditions. "I think that the stories that the movie is trying to tell are ever more important now than [they were] two years ago," López says. 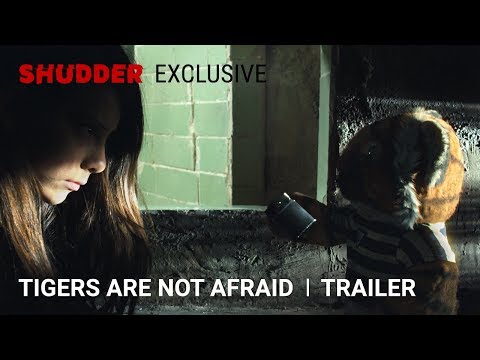 Like Pan's Labyrinth and countless films before it, Tigers couches its heartbreaking and difficult realities in stunning moments of fantasy, many of which revolve around representations of the eponymous big cat. López landed on tigers almost by coincidence. She imagined having a zebra appear, incongruously, on a Mexican street at one point, but was told by an animal handler that it wasn't available. The follow-up question: What about a tiger? "My first instinct was no," she says. "You cannot just put a tiger in a scene like that, on the loose, and never go back to it."

Then she started thinking: What if a tiger prowling the streets is the stuff of rumor? And it becomes, as López explains, "both an object of fear and fascination? It's a totem, and it's a powerful image." Shine tells a story about a rich man who owned wild animals murdered by the Huascas, the gang pursuing the children. All the beasts were killed except the tiger, which now roams angry and hungry. With that, López found the central motif of her film. The tiger is empowering and terrifying to Estrella and the boys, the same as the fear and beauty of López's movie itself.