'Tolkien' Is a Very Nice Movie, and That's About It

There is one really, really great scene in Tolkien, Dome Karukoski's new biopic about the Lord of the Rings author, that I haven’t stopped thinking about since I saw the movie. About halfway in, as J.R.R. Tolkien (Nicholas Hoult) and his flame Edith Bratt (Lily Collins) are enjoying a fancy dinner date, they start talking about the nuances of language. Tolkien, nerd that he is, is obsessed with the creation of words, of language, of giving meaning to sound. (He'd later go on to invent multiple language and writing systems for his legendary book series.) He tells Edith that what he values over anything else is sonic beauty, that he wants to create a language whose words sound pleasing over everything else. Honestly, this scene alone makes this movie worth seeing.

Halfway through the conversation, Edith whips out "cellar door," which has long been used by phonaesthesians -- that is, those who study the pleasantness of certain sounds and words (many believe "phonaesthetics" was first used by Tolkien himself) -- as an example of a word whose meaning is pretty boring, but whose sound is pleasing to the ear. Edith, on the other hand, believes that it's the meaning of words that gives them their beauty: that a word can sound any way it wants, but if it represents something lovely, then it itself must be so. Their debate is carried out in hushed tones in the middle of a bustling restaurant, softening nearly to ASMR-levels, while Tolkien uses the phrase to come up with a fantastical story of his own. 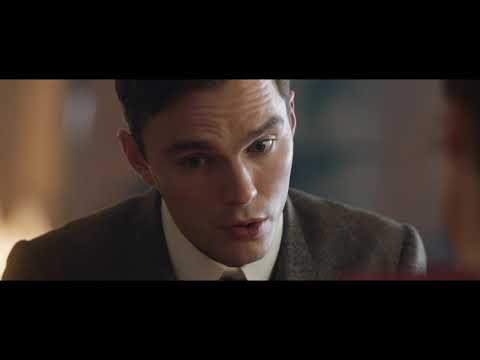 This is more or less the central debate of the movie (if there even is one), which tracks Tolkien's adolescence and young man-hood before tossing him and his "fellowship" of schoolboy friends into the mire of World War I. What about language gives words their importance? Is it the way they sound, as he thinks, or what they mean, as Edith says? Tolkien would, of course, go on to use his aesthetic theory in his stories anyway, often as a signifier of either good or evil. The language of the Elves in Middle Earth is beautiful; the language of the creatures of Mordor is ugly.

If you know anything about The Lord of the Rings and Tolkien himself, you probably know that, yes, it was his friendships as a young man that inspired the characters and camaraderie of The Fellowship of the Ring, and it was fighting through the worst war in history (at that point in time, at least) that drew him to creating tales of good warring against evil, dark, powerful magic, and terrifying creatures.

That's certainly interesting and inspiring, but it's not enough to provide a clear, exciting backbone for a movie, which is why a lot of Tolkien feels like a very by-the-numbers biopic. Both Hoult and Collins are great in it, because they're both wonderful actors, as are many of the cast. The OA's Patrick Gibson, who plays Robert Gilson, is a welcome, hilarious presence in Tolkien's crew of young boys, and Shakespearean veteran Derek Jacobi appears late in the film as one of Tolkien's college professors. Even Colm Meaney is in it as Father Francis, a priest who took orphaned Tolkien and his little brother under his wing after their mother died, and who convinces Tolkien to go to college instead of marrying Edith.

There is a sort of frame narrative: the movie cuts back and forth between Tolkien's life in flashback pre-World War I and him in the trenches during the Battle of the Somme, sick, yelling at a private (Red Oaks' Craig Roberts) to please go and find the one friend from his past he knows must be close by. As Tolkien gets sicker, these scenes get a little more fantastical, with smoke wraiths and orcs appearing out of the fog in no man's land. In this way, Tolkien is firmly an origin story: here's what happened in his life before he was famous, before he created his masterwork. Here are the things and people that inspired him.

And that's the thing, really. The Lord of the Rings is fantastic and extremely formative for the high fantasy genre as a whole. The life of the guy who wrote it, according to this movie, is… pretty nice? Pretty okay? He (spoiler alert) survived the war and built a nice family for himself and made some nice new friends (one of whom was C.S. Lewis). It's difficult to take the events of one person's true life and turn them into riveting cinema, mostly because true life is often not very exciting at all. There are certainly people who led lives more extraordinary than average, but when we try to extract, the cold facts we know from the character of the person himself, it gets tricky. Tolkien is plenty likable, very romantic, quite beautifully shot, and the scenes with him and his buddies are very fun, but there's not much else to it. The famously thorny Tolkien estate disavowed the movie, saying that they "do not endorse it or its content in any way" -- mostly as a statement making clear that the events in the movie shouldn't be taken as fact. But, even with a wealth of invented conversations and events and emotions, if a movie can't be anything more than "nice," then what's the point?