Triumph the Insult Comic Dog Poops Masterfully on the 2016 Election

There is nothing a cigar-smoking canine hand puppet can't do. Robert Smigel created Triumph the Insult Comic Dog back in 1997 as bit for Late Night with Conan O'Brien, and he's used the persona to skewer such eminently skewer-able subjects as Westminster Dog Show attendees, Bon Jovi obsessives, and Star Wars fans. But his latest outing, the 90-minute Triumph's Election Special 2016, streaming exclusively on Hulu, is a magnum opus -- a Borat tailored for Smigel's pup prankster and a political spoof so crude that even warmongering oil barons will flee the scene. It is sublime.

Thanks to Triumph, we are done with simple "Ted Cruz is snide," "Martin O'Malley is a failure," "Chris Christie is fat," and "Donald Trump is Donald Trump" jokes. Triumph delivers far more effective one-liners here. Access is key. And there's Triumph joining the press backstage at a Democratic debate, hitting every Midwestern rally supporting Ted Cruz, and booking time with Mike Huckabee for a one-on-one insult training session, all so he can poop on the process.

Whenever he encounters push-back from strident interviewees or legitimately offends onlookers with his lowbrow takedowns, he still doesn't let up -- a refreshing thing to see at a time when even the smallest comedic offense stirs up Twitter outrage. The Triumph-Smigel duality is fascinating to watch. At times, the man with hand knows he's crossing the line. Still, Triumph pushes forward, saying all the worst things with a dumb grin on his face. No one is safe. No one should be. Somehow, even O.J. trial lawyer Alan Dershowitz, American Idol's Sanjaya, and the "Dude, You're Getting a Dell" guy find their way into this show.

Tune in to Triumph's Election Special 2016 to enjoy such bits as... 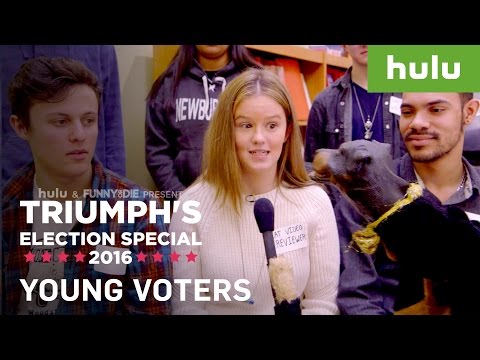 Triumph visits the University of New Hampshire to meet the students behind the "Bias-Free Language Guide," an aggressive, word-erasing initiative designed to temper cultural insensitivity. These kids will not use the word "American" because it's offensive; imagine what happens when they meet Triumph.

...Triumph breaking a student's heart in half

Here's the moment when you almost feel bad for her. Almost.

Matt Patches is Thrillist’s Entertainment Editor. He previously wrote for Grantland, Esquire.com, Vulture, The Hollywood Reporter, and The Guardian. He bows down to Triumph's riffing skills . Find him on Twitter @misterpatches.