The Creators of 'BoJack Horseman' Have a New Animated Series on Netflix, and It's Just as Good

In Netflix's new animated animal buddy comedy Tuca & Bertie, Bertie, voiced by Ali Wong, experiences a panic attack in the grocery store as a musical number. "There are too many fears to name / snakes, earthquakes, blood, and hurricanes," she sings in a delightful ditty during the fourth episode about her anxiety disorder. "I'm losing my shit / but I can't help it / right now." It's a dark moment presented as a fun time, a twisted lighthearted approach to the relatable self-doubt and fear that makes life's small problems feel devastating. That move has long been a staple in comedies, from The Simpsons to Adventure Time, and it runs throughout the new show about two best friends, who also happen to be birds, navigating their early 30s.

The show will draw obvious comparisons to its Netflix sibling Bojack Horseman, which Tuca creator Lisa Hanawalt produced and designed. (Additionally, Bojack creator Raphael Bob-Waksberg serves as Tuca's executive producer.) Despite subtle animation differences, the shows seem to exist in similar narrative universes; Tuca & Bertie takes its blurred line on object sentience further, introducing us to talking, walking, breast-having plant people and a cell phone that speaks when it's in danger. Like Bojack, Tuca & Bertie uses animal people to mine the depths of human vulnerability, but its efforts are focused squarely on a friendship between two millennial women, and the anxieties that surround them. 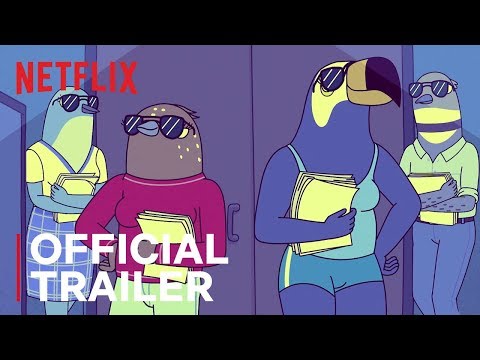 The series begins with Tuca (Tiffany Haddish) freshly moved out of the apartment she shared with Bertie, a trying change even though she moves to a studio apartment only one floor up in the same building. The move is the catalyst for a season's worth of growing pains as Tuca, a free spirit and gig economy worker, struggles to grow into her newfound state of self-sufficiency while maintaining her closeness with her old friend. Meanwhile, Bertie learns to adjust to her new serious relationship while still being there for Tuca, advocating for herself at work, and fending off sexual harassment from the pastry chef to whom she is an apprentice.

If that synopsis sounds a bit unbalanced between the show's stars, that's because it is. Tuca has her own developed backstory -- which includes her recent sobriety, her strained relationship with a rich aunt who pays her rent, and her disconnect from her siblings following her mother's death -- but most often (partially by way of her casually employed lifestyle), she is a waiting sounding board and bottomless well of reassurance and support for Bertie's every worry. We rarely see behind Tuca's jester-like mask and, in turn, Bertie has the most affecting storyline in the series.

Tuca & Bertie has the kooky tenderness of fellow best friend comedy Broad City, but with fewer laughs, unfortunately. What it lacks in guffaw-inspiring jokes, however, it makes up for in visual appeal. Like BoJack, Tuca & Bertie includes masterful sight gags (even just watching how Tuca's head moves is a joy), and, moreso than its predecessor, leans into animation experiments and cartoon conventions that make its diegesis even more surreal. Think ample classic sound effects, like the sound of a tea kettle whistling as Bertie gets angry in a meeting, and scenes where the animation style turns into video game graphics or an Ikea diagram or cuts to just a split second of a straight-up realistically detailed photograph, a la Spongebob Squarepants, with which Tuca & Bertie shares a similar zany, chaotic pacing and tone. At first, I thought it could almost pass for a kids' show if not for all the swears and boobs. Its this visual richness that makes some of the show's more absurdist subplots -- like when one of Bertie's breasts, tired of sexual harassment in the workplace, hops off her chest in protest -- feel like precious time taken away from character development.

The show's darkest moments that give intimate dimension to Tuca and Bertie's relationship are approached briefly and at arm's length. In one episode, Bertie remembers how scared she was in a past instance when Tuca almost died from alcohol poisoning. In another scene, Bertie discloses to Tuca that a lifeguard sexually assaulted her one summer at a lake, leading her to give up on her goal to swim all the way to an island in the middle of the ocean. Both make it clear that Bertie and Tuca's comedic, magical world still has a touch of brutal emotional realism, but not enough to pull the show far enough into the world of drama that would make their decisions or storylines feel more weighty or consequential.

Nevertheless, in their starring roles, Haddish and Wong make for a delightfully over-the-top and heartwarming comedic pair. Wong, in particular, shines, playing Bertie's generalized anxiety with an explosive earnestness that will cut to the core of many who share the condition. A running joke where Bertie worries that everyone at her job hates her when in fact they don't -- in one scene, she worries that her coworkers are angry at her for missing a meeting, but a quick cut to the office reveals them celebrating that they get to watch a movie instead -- is one of the show's most successful bits.

With its relatability and visual innovation, Tuca & Bertie will undoubtedly draw many fans, especially ones looking for the same cynical high that BoJack uniquely delivers. The mystery of the world's laws of nature -- What's the difference between a dog-person and his dog pet? Are Tuca's "sex bugs" intelligent beings? Can regular plants become plant people or are they born that way? Birds can swim? -- is another entertaining aspect in itself. The characters the show has established in this first season warrant further exploration and development. But, with the show's visual richness, that lack of early depth is more a sign of even more possibility for its next season, though Netflix hasn't confirmed its return yet. In the end, Tuca & Bertie is a charming reflection of two slices of millennial life, with lots of joy and hints of tragedy. The world can always use more stories about female friends holding each other down, even if one is an insatiable toucan and the other is an anxiety-ridden song thrush.