To Understand the Ending of 'Vivarium,' You Have to Go Back to the Beginning

The creepy sci-fi movie that recently hit Amazon Prime takes a cue from a parasitic species of bird.

This piece contains spoilers for Vivarium.

In Vivarium, a young couple finds themselves drawn into and trapped inside a 21st century suburban nightmare: a neighborhood populated by an endless sprawl of homes of the exact same size and shape, isolated from the world and crushed by the brutal sameness of their surroundings. Unlike your typical 21st century suburban nightmare, the couple also finds themselves enslaved to a race of interdimensional humanoids, forced to nurture one of their kind as it grows, with unnatural swiftness, from infant to adult.

Like creatures out of The Twilight Zone, these beings lure Tom (Jesse Eisenberg) and Gemma (Imogen Poots) into a labyrinth walled-in by mint green cookie-cutter houses, promising that they'll be "released" once their charge has reached adulthood. Unwilling to accept their fate, Tom and Gemma each descend into their own forms of madness, and the ending of the movie features a psychedelic journey through multiple realities and a final scene that's as mysterious as it is brutal. 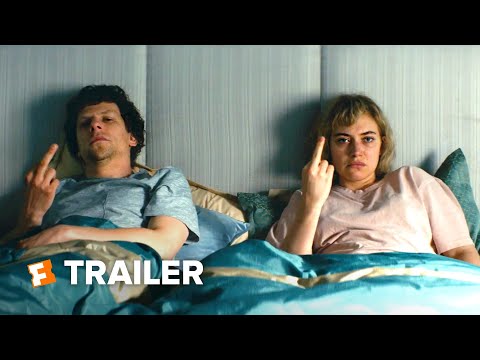 In the final 20 or so minutes, Gemma, determined to find out where her horrid adoptee goes every day and who he's meeting in their deserted suburban wilderness, slips after him underneath a portion of pulled-up sidewalk and finds herself tumbling through different-colored pocket universes, each inhabited by other sets of despairing, unwilling "parents" to identically clothed little black-haired boys. Some have given up, some have committed suicide, and some simply sit at their kitchen tables staring. Thumped back into her own dimension, she can only wail as her charge "releases" the dead body of Tom, zipping him inside a body bag and tossing him into the hole he spent his last days obsessively digging. Soon enough, Gemma is "released" as well, and their "boy," who is now more of a man, gases up their car, drives himself out of the housing development and back to the fateful real estate agency, where he takes up his aged fellow's post, pinning on his nametag and sitting down to wait for an unsuspecting couple to walk through his doors.

What happens is more or less straightforward, but to understand its purpose, and to find a very ominous clue, you have to go back to the beginning. At the very start of the movie, we see images of a nest of tiny baby birds -- except one of them isn't so tiny. After pushing first an egg and then one of its fellow birdlings out of the nest and onto the ground, the large baby, which turns out to be a baby cuckoo, gets the parents' full attention, growing bigger and fatter while barely fitting inside the nest. Many species of cuckoo are brood parasites, meaning the cuckoo parents don't actually care for the cuckoo babies. Instead, they surreptitiously lay their egg inside the nest of another bird, and the baby, once it hatches, quickly seizes control of the family unit. The unwitting parents are driven to exhaustion feeding their adoptive child's enormous appetite, and often perish.

The creatures of Vivarium, whatever they are, are similar, using humans to do all the work to supervise their survival. It's never actually explained where they come from, why they're here, or what their actual purpose is beyond simply reproduction, but one gets the sense that they've been around for quite a while, feeding off of humanity's skill in child-rearing. "That's how it is," Gemma explains to one of her preschool students when it asks about the villainy of the cuckoo's life cycle.

If you want to go deeper, director Lorcan Finnegan used the bones of another project of his to flesh out his newest, which originally premiered at the Cannes Film Festival in 2019. His short film Foxes, which, like Vivarium, is also available on Amazon Prime, also features a young couple trapped in a neighborhood of empty, identical homes, except this one was inspired by the epidemic of "ghost estates" across Ireland: barren housing developments that were built during the economic boom of the Celtic Tiger, and subsequently left vacant in the aftermath of the late-aughts global recession. Cut off from society and trapped in their swiftly devaluing home, the couple feels the weight of encroaching nature retaking the space, roots ripping up pavement and vines covering vacant lots, until they must either join or be consumed by it.

There's a folkloric aspect to both of these tales. Directly translated from the Irish language, the "ghost estates" of Foxes become "fairy estates," and it's easy to imagine Vivarium as a kind of modern inversion of the Unseelie changeling myth, the fairies appearing as sinister real estate agents trapping their human victims inside endlessly fractaling neighborhoods instead of the hollowed-out hillocks of legend. In both, the final message remains the same: There still remain some liminal spaces in this world where humans simply aren't meant to set foot.