Major spoilers for the mid-season finale of The Walking Dead Season 7 to follow.

By last week, it was clear that The Walking Dead would be heading into a deadly finale: Negan, the big bad terrorizing our heroes since this season's notoriously bloody premiere eight weeks ago, had descended upon the Alexandria Safe Zone with that same ready-to-murder look in his eyes, weirdly pleased to sit down to dinner with an angry Carl and wide-eyed baby Judith for a cool glass of lemonade and God only knows what else. Daryl, meanwhile, was poised to escape at last from solitary confinement in the inner recesses of the Sanctuary, thanks to some handy jailbreaking work from Jesus, who'd snuck a ride into the place by way of an inbound cargo van. Add to that Rosita -- newly armed with a handgun and single homemade bullet, courtesy of Eugene -- and the always stupidly eager-to-please Spencer.

There was no way the seventh mid-season finale, "Hearts Still Beating," would come and go without blood. The Walking Dead more than delivered.

First was that idiot Spencer who made himself an obvious target straight away by approaching Negan with designs on Alexandria's leadership. Spencer evidently considers himself something of a worldly diplomat in the mould of his late mother, former state governor and head of Alexandria before the arrival of Rick Grimes. Turns out he's just a kiss-ass and a wimp. Negan, never one to pass up an opportunity to make a point, saw through Spencer's schmoozing immediately -- and made that clear in a big, messy way. After cutting the poor guy down as a gutless coward in front of the entire Alexandrian populace, the bruiser proceeded to slice him in more literal ways, resulting in a very dead Spencer and a whole lot of grisly innards on public display. That's Negan for you: he'll spare Carl despite attempts to kill him because he admires the gall and audacity. But sneak around and try to charm the guy? That's when you get a knife to the belly.

Spencer wasn't the only one who failed to survive the hour. Olivia, the friendly matriarch figure whom Negan already threatened twice (with death and sex both), took a bullet to the face after Rosita took aim and shot at Negan, missing him but leaving her homemade cartridge lodged squarely in the side of Negan's bat Lucille. Instead of retaliating, Negan punished Rosita for the act by determining who made the bullet in the first place. Negan appreciates the nerve of the thing: he actually seems to like Rosita, attempt on his life and all.

We know well that it was Eugene who manufactured the ammo on his own in an abandoned factory near the town, and after a bit more pressure -- Aaron's little-seen partner nearly lost his life too -- Negan discovers this little fact for himself. That's useful information and even more useful talent. So naturally, Eugene, once revealed for all his skills, got himself kidnapped and whisked away to the Sanctuary. Who knows what fate awaits the poor guy. Probably a bad one. 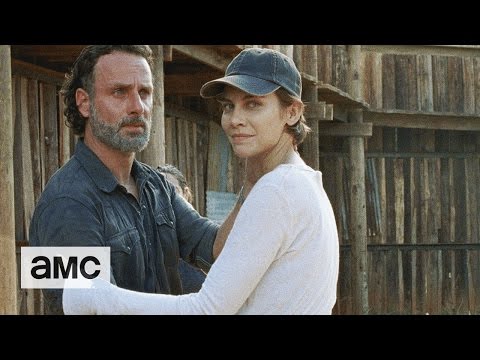 So where does that leave everyone at the end of the finale? Not defeated and depressed, oddly enough. The future could be quite the opposite. After a heart-to-heart with Michonne -- herself back from a scouting mission to the Sanctuary that revealed to her the full scope of Negan's massive army -- Rick Grimes is back to his old indefatigable self. We leave him at the episode's end regrouping at the Hilltop with Maggie, Sasha, and Enid, declaring his plans to work together with them all and finally attempt to fight.

Best of all is the surprise at Hilltop waiting for him: Daryl, who has not only made it back in one merciful piece, but has managed to reclaim the iconic revolver Rick long called his own. It's a terrific and inspiring moment, one that brings the Rick we know back full circle and offers us -- and them -- a much-needed glimpse of hope. The gun is a reminder of how much Rick and the other survivors have accomplished and endured together, and it offers not so much a practical solution -- however useful even one gun is to the group at this point -- but a symbolic one. It suggests that a brighter future may indeed be on the horizon for Alexandria. And it suggests that Negan can be defeated by our heroes after all.

The Walking Dead returns in February 2017.