'The Walking Dead' Just Put Everyone in Position to Kill Negan

Seven episodes into The Walking Dead’s seventh season -- just one week out from the mid-season finale -- the chessboard is finally arranged for imminent checkmate.Tonight’s 90-minute special was all about movement: major players of every allegiance swapped encampments, made sudden escapes, hitched rides with strangers, and snuck themselves where they shouldn’t be. It was less chess than a round of postapocalyptic musical chairs. In fact, “Sing Me a Song” whisked so many people from point A to point B that a victory for our heroes looks, for the first time, to be within grasp.

In "Sing Me a Song," Carl is far from Alexandria, having fled with his pal Enid, the first to catch up with Maggie in the Hilltop and then, more dramatically still, to seek revenge. The kid's grand Negan assassination plot doesn't go exactly as planned, true, but in his defense, he manages to gun down a pair of unlucky Saviors before submitting to the big bad’s grinning capture. The snafu draws Carl into Negan's embrace; a routine intimidation leads to a full tour of the Sanctuary, replete with a visit to the wives’ room, a parlay in Negan’s personal quarters (nice digs, too), and a stop off at “the iron,” where any Savior foolish enough to cut corners earns a ghastly permanent scar. Like Daryl before him, Nean spares Carl from a face-to-face with Lucille. Is this mere recruitment? Does Negan fancy himself a father figure to the boy he calls a real badass-to-be? 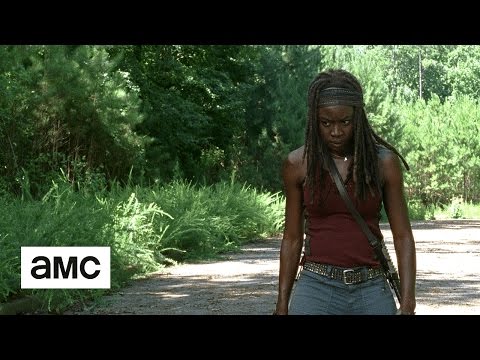 It may not matter much. Jesus finds an alternative (i.e., less ridiculous than Carl's super direct route) way into the Sanctuary compound. And there’s Michonne, vengeful and in the passenger seat of a truck headed towards the Sanctuary. What exactly Michonne or Jesus plan to do in the mouth of madness is anybody’s guess. Michonne has only a sword to her name, and a whole lot of armed Saviors to fend off with it if she takes this ride to its final destination. It's a tall order, even for someone as talented (and bloodthirsty) with a blade. Jesus, on the other hand, may simply be scouting. Now he knows where the Sanctuary is and how to get there should the occasion demand it, which would certainly be an asset in any kind of all-out war; there’s a good chance he’ll just head home now that he’s got the intel.

Oh, and he's breaking Daryl free. We know that our man behind bars now has a key, and it’s very likely that Jesus himself is the one to thank for the aid. The real question now is what Daryl’s going to do with this chance. He has the means to escape. Does he have the will? Or did Negan truly break him? An escaped Daryl may not head for home. With Jesus on site, Michonne en route, and a few dozen dissenting Saviors feeling mighty dissatisfied with the current regime, Daryl may lead the charge for the liberation of the Sanctuary. We already know that Dwight isn’t pure in his conviction in the Savior cause. This may be the opportunity all of them are secretly hoping for: mass revolt.

There could hardly be a better moment for it. While every vigilante with a grudge in D.C. is headed to the Sanctuary with a vengeance, Negan himself is split: he’s in Alexandria, of all places, settling in porchside with his new friend Carl and poor baby Judith. (Not to mention a cool glass of lemonade.) He’s liable to stick around — at least until Rick returns from the apparently endless supply run that’s brought him to some kind of swamp-borne gun store and ammunitions cache — but what’s important is only that he remains seated long enough for every other traveler of the episode reach his or her final destination.

Whatever drama unfolds at the Sanctuary next week, the boss man won’t be around to see it happen. His new problem is the damage Rosita intends to do with the bullet Eugene crafted for her. You see what I mean about the chessboard? On the one side we’ve got Jesus, Michonne, and a newly freed Daryl let loose together on a Negan-less Sanctuary. On the other we’ve got Negan kicking back without an army to defend him and an angry woman named Rosita rolling in with a bullet and an unaccounted-for gun. What’s the board going to look like after the next move is taken? What’s the state of things going to be when Rick gets back? The mid-season finale should hold a few answers... or a cliffhanger.