That 'WandaVision' Surprise Character Has Huge Implications for the MCU

Welcome to the show, [REDACTED]!

With five episodes in the can, WandaVision still hasn't given us a huge amount of information about what's going on here and why, aside from confirming that it's Wanda herself who is controlling nearly everything in this small town that's been morphed into sets from various American family sitcoms. In Episode 5, titled "On a Very Special Episode…" with a set inspired by the '80s sitcom Family Ties, Wanda and Vision's twin sons are growing up pretty fast, literally, as they're aging five years every time you blink, and they're also learning that life can be full of both joy and sadness.

After having a very hypocritical conversation with her sons about why she can't bring their dog back to life (after literally doing that with Vision's dead robot body to start all this mess), Wanda is arguing with Vision about why it's right or not for her to force the citizens of an entire town to play background characters in her idealized life, when the doorbell rings. Wanda opens the door to find a truly shocking visitor. The camera zooms in tight on her shocked face, and in front of her, we can see the back of a head—a head topped by a shock of white hair. Oh shit, you think, it's her twin brother, Pietro! Then, swaggering in like the Fonz, comes... wait, who is that? 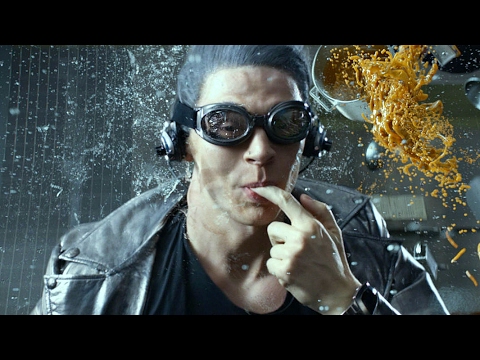 It's Pietro, sure, but this is a different-looking Pietro than Wanda would be familiar with (which Darcy Lewis, watching on the TV at the S.W.O.R.D. base, helpfully points out with her line: "She recast Pietro!?!"). This is technically Peter, the name Pietro Maximoff, a.k.a. the mutant hero Quicksilver, goes by in the recent X-Men movies. In that franchise, he's impishly played by American Horror Story regular Evan Peters. But isn't this the MCU? Shouldn't Pietro Maximoff be played by Aaron Taylor-Johnson, who had a short, tragic run as Pietro in Avengers: Age of Ultron?

Maybe, but not necessarily. If you remember, Disney acquired 20th Century Fox, the company that has held the film rights to the X-Men franchise for decades, finally creating the opportunity to merge those hugely popular characters into the Marvel Cinematic Universe. Quicksilver (for reasons that are nebulous, but which ultimately boil down to Wanda and Pietro having spent time in the comic books as members of both the Avengers and the X-Men), is one of the few characters to have appeared in both the X-Men movie franchise and the Avengers movies, but they're played by different actors: Peters in 2014's X-Men: Days of Future Past and the subsequent two installments, and Taylor-Johnson alongside Elizabeth Olsen in Age of Ultron after their mid-credits cameo debuts in Captain America: The Winter Soldier, released a month before Peters' debut.

So why is it Evan Peters showing up here? This episode is clearly set in early '80s, which is roughly a decade after the events in X-Men: Days of Future Past, in which Quicksilver is a teenager. In the MCU, an adult Pietro showed up in 2015's Avengers: Age of Ultron, which was set in the present. In that movie, Pietro died saving Hawkeye from being shot by Ultron firing the Quinjet's guns, and Wanda sensed his death through her psychic powers. Evidently, she's been dealing with that grief for quite some time. And maybe not in a super healthy way.

So one explanation could be that Aaron Taylor-Johnson, the MCU's older version of the character, will also show up on WandaVision; this would be possible in the narrative, given how fast Wanda's constructs (namely her children) have been aging, although the show would likely keep Evan Peters' younger Peter/Pietro around for at least one more episode before aging him up.

It's also possible that Peters is solely playing the character in the MCU now, which would allow for a slightly more seamless transition of the X-Men into the MCU. And there's also the multiverse possibility, where both versions will appear simultaneously.

Earlier this week, Elizabeth Olsen teased to TVLine that WandaVision would have a cameo moment on par with Luke Skywalker showing up in The Mandalorian finale. Is Peters' X-Men version of Quicksilver that cameo? Or will it be even bigger? If WandaVision is a riff on Marvel Comics' House of M saga, will either Michael Fassbender or Ian McKellen show up as Magneto? Or will the show connect more directly with the next installments planned for the MCU, inviting Loki or Doctor Strange or even Tony Stark to cameo somehow? Who knows! But Peters joining the mix is a clever way to hint at big things to come, in WandaVision and beyond.