The 'WandaVision' Finale's 'Blade Runner' Reference Will Break Your Heart

Part of the joy of watching WandaVision is catching all the little sitcom references the show throws into its sets, costumes, and suburban high jinks. From Bewitched to Malcolm in the Middle, the show was a collage of American family programming throughout history, every episode except the last few bringing some new surprise or tweak to a classic. The finale, like the couple of episodes before it, ditched the pastiche in favor of some good old-fashioned Marvel superhero action and special effects, but it didn't ditch the references altogether. The final episode actually contains a crucial Blade Runner Easter egg that may be the key to understanding where one V.I.S. (Very Important Synthezoid) is going from here.

In the episode's mid-credits scene (and, yes, there is a post-credits scene as well, so watch the whole thing) the fledgling superhero Monica Rambeau is shepherded into Westview's cinema, where she meets a Skrull in human disguise and learns that someone "up there" (who we can pretty confidently predict is Nick Fury, living in space since Spider-Man: Far From Home) is dying to meet her. All of that pretty neatly ties Monica's loose ends together and sends her on the next stage of her journey, but first, before Monica sets foot in the theater but after she'd learned the goofy truth about Evan Peters' Pietro, we see the marquee outside advertising something called "TANNHAUSER GATE: PUT THE FUN 1N DYSFUNCTION" [sic].

The movie theater has appeared in the show before, placed as it is in the middle of the town square, and it's often been used to immerse particular episodes further in their eras. Big Red, The Parent Trap, The Incredibles, and Oz the Great and Powerful were all featured prominently on the building's facade, but the sign in the final episode, even after the town is released from Wanda's magic, showcases a movie that… doesn't actually exist. You could certainly say that the tagline playfully references how Wanda and Vision's family "put the fun in dysfunction" this whole time, but what is this "Tannhauser Gate?" 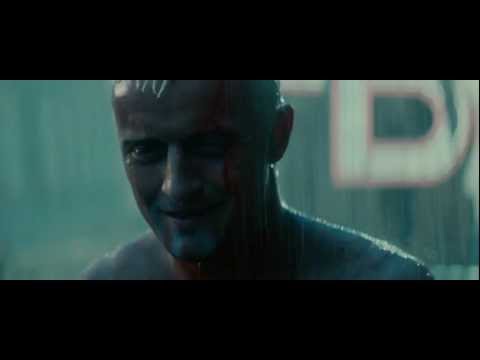 Well, it's a Blade Runner reference. And it's not just some throwaway nerdy gag either, but a pretty deep callback to one of science fiction cinema's greatest moments. At the climax of Blade Runner, replicant (a human-like android) Roy Batty (played by Rutger Hauer) and android hunter Rick Deckard (Harrison Ford) share a rain-soaked final conversation on the roof of a building, during which Roy talks about how unfair it is that the androids, human in all but name, aren't allowed real lives.

It all leads up to what's been deemed the "tears in rain speech," where Roy waxes poetic about the awe-inspiring things he's seen, and how, when he dies, all of those memories will be gone. "I've seen things you people wouldn't believe," he says. "Attack ships on fire off the shoulder of Orion. I watched C-beams glitter in the dark near the Tannhäuser Gate. All those moments will be lost in time, like tears in rain."

The best parts of this show, as in most Marvel productions, have always been the scenes where characters just talk. In the penultimate episode, when Agatha Harkness was taking Wanda around to all of her memories, Wanda and Vision's conversation in Wanda's room was the part that stuck with me the most. In the finale, the best scene, I'd argue, is the one between Vision and White Vision in the library, where they discuss the thought-experiment "the Ship of Theseus," debating whether the original ship or an exact replica of the ship in which every rotting board is replaced is the truly real version. Our Vision, which we know to be a completely fabricated replica of a Vision who no longer exists, and the White Vision, who was made from the remains of the real Vision's body, are the two versions of the Ship of Theseus in this metaphor.

"Perhaps the rot is the memories," Vision says. "The wear and tear of the voyages. The wood touched by Theseus himself." Both Visions have access to the memory of who they were before, Vision because he was recreated from the fragment of the Mind Stone that exists within Wanda, and White Vision because his body retains all the knowledge and personality of his former self that S.W.O.R.D. had locked away to make him into a weapon. When Vision fixes this, White Vision remembers, even if he's still different. In the comics, it takes some time for White Vision to recall the aspects of his personality that made him who he used to be. It also makes it a little less sad when Wanda's Vision disintegrates after she dissolves the Hex at the end of the episode, because we know there's another Vision out there, waiting to remember who he is.