A memo to power-lunchers: you're fired. Nowadays, if you're a male movie or TV character with Serious Man Business to conduct, you're going to look weak if you do your negotiating at a traditionally negotiation-friendly location like a corner office, a classy restaurant, or a golf course. So the next time you're scheduling a meeting with that dickish client who looks a little bit like Gordon Gekko, you might want to suggest brokering the deal at one of these seemingly inappropriate yet apparently effective venues, as witnessed in countless films and shows. 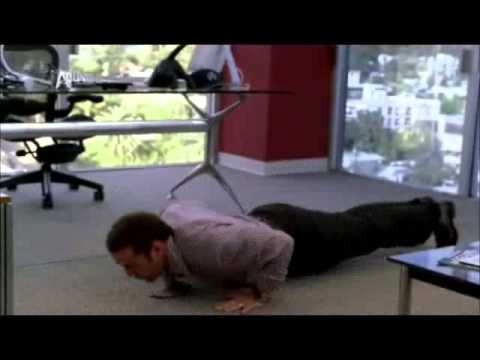 The gym (Bluetooth headset not optional)

Conducting meetings while exercising is an age-old business practice; the rich and powerful are often forced to squeeze in their calisthenics during office hours. Naturally, NBC’s The West Wing -- the show that pioneered Aaron Sorkin's "walk-and-talk" -- also employed the jog-and-talk on occasion, as when Josh Lyman (Bradley Whitford) held a campaign finance reform meeting with the vice president while the pair went running. Suffice to say, if the West Wing gang had been around in the era of treadmill desks -- like Doug's on House of Lies -- the Josiah Bartlet White House would have been riddled with them.

But the master of the cardio rant has to be Entourage super-agent Ari Gold (Jeremy Piven), who was prone to barking instructions into his cellphone while pounding the pavement, doing push-ups, or putting pedal to the metal on his stationary bike. 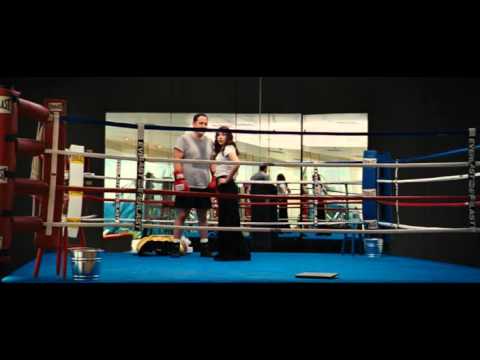 There’s nothing too unusual about discussing work matters over a game of golf or billiards, but sometimes fictional dudes need to serve up negotiations while beating the crap out of each other. Take a recent episode of Empire, in which record mogul Lucious Lyon (Terrence Howard) gets in the ring with a potential business associate to broker a merger and, perhaps unsurprisingly, ends up punching the guy in the face.

Meanwhile, in Iron Man 2, when Tony Stark (Robert Downey Jr.) meets Natasha Romanoff aka Black Widow (Scarlett Johansson), he doesn't exactly call off his boxing training in order to conduct his business like a civilized bloke. Rather, he lets her sub in for him and watches as she demonstrates her superhuman strength. 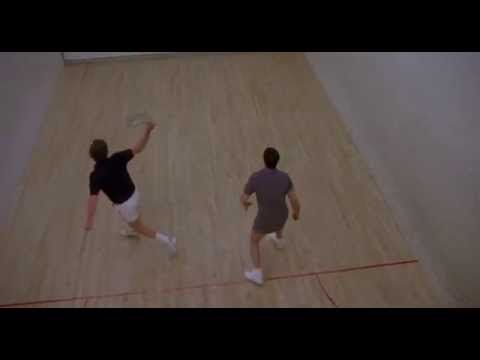 The court (bring your racquet)

Beyond the ring, big- and small-screen bros also love to discuss business over racquet sports, presumably because they're the most white-collar pastime ever, but also because the to-and-fro of the game is a great cinematic metaphor for the back-and-forth of a negotiation.

But choosing to discuss matters of high importance with a racquet in hand can have its risks. In Mr. Deeds, conniving media exec Chuck Cedar (Peter Gallagher) uses a casual tennis match as an opportunity to engage Preston Blake (Adam Sandler) on the topic of inheritance -- and gets thwacked in the face by Preston's killer serve in the process.

The most iconic example of this trope, of course, happens in Oliver Stone's Wall Street, when corporate shark Gordon Gekko (Michael Douglas) holds an offsite meeting with his young protege Bud Fox (Charlie Sheen) at his country club, starting with a tone-setting face-off on the squash court.

The shvitz (towel not included)

However, Gekko saves his most serious business for the sauna and locker room, where he cites Sun Tzu's Art of War and delivers his famous pep talk about life on the trading floor. "All these Harvard MBA types -- they don't add up to dog shit," he tells Fox while toweling himself dry. "Give me guys that are poor, smart, and hungry, and no feelings. You win a few, you lose a few, but you keep on fighting. And if you need a friend, get a dog. It's trench warfare out there, pal."

And Gekko isn't the only one who knows that important deals get done post-workout, too. In The Blues Brothers, consummate chillers Jake and Elwood (John Belushi And Dan Aykroyd) meet their old booking agent Maury Sline (Steve Lawrence) in the sauna to negotiate their next gig -- hats and sunglasses still on, of course.

Tony Soprano and his associates were likewise no strangers to conducting business in the steam room, like the time trouble-making Ralphie (Joe Pantoliano) helped facilitate a housing-development scam (pardon the Italian-language footage) alongside a couple city bureaucrats -- no doubt making them sweat.

And who can forget when rival Mad Men execs Roger Sterling (John Slattery) and Jim Hobart (H. Richard Greene) traded barbs over Burger King and Buick while converting vodka to perspiration amid an afternoon respite from the humdrum of boardrooms and clothing? 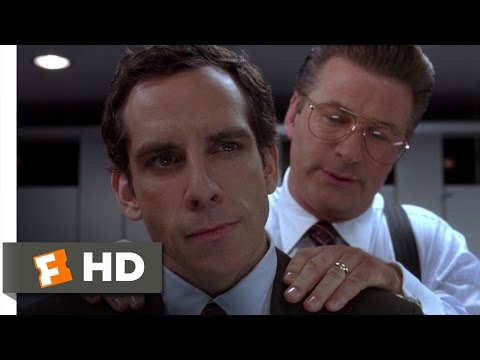 But the quintessential male-bonding locale-turned-meeting spot has to be the bathroom. Indeed, the urinal happily doubles as both an intimate space and a sort of a proxy, breakaway conference room easily accessible in any public venue.

But our favorite example of this is in Along Came Polly, when germaphobic insurance actuary Reuben Feffer (Ben Stiller) is roped into talking about a prospective deal with his boss Stan Indursky (Alec Baldwin) mid-stream, during which Stan breaks all the rules of bro-on-bro bathroom-business etiquette. Not cool, man. Not cool.

Anna Silman is a staff writer at Thrillist. She previously wrote for Salon and Vulture. She enjoys receiving important phone calls in the bathtub. Find her on Twitter: @annaesilman.