'We're Here' is all about elevating queer voices and building community.

By now we know not to underestimate HBO. The network ushered in the golden age of television dramas, marketed a medieval fantasy to mainstream audiences, gave Seinfeld comics a platform to build upon their legacy, and revolutionized the way TV talks about sex and relationships more than once. In April, ahead of its new streaming service debut, HBO quietly premiered We're Here, a tearjerking reality show that's taken real strides toward increasing queer visibility in rural communities nationwide.

We're Here follows three drag superstars on their mission to nurture queer leaders throughout small-town America. There's Bob the Drag Queen, a New York City icon and winner of Drag Race Season 8; Eureka O'Hara, the "Elephant Queen," who nearly took the crown in Drag Race Season 10; and Shangela Laquifa Wadley, the three-time Drag Race contestant who landed a role in A Star Is Born. In each episode, the queens spend a week in a different conservative community, traveling to places like Farmington, New Mexico, and Ruston, Louisiana, where they adopt a few locals as their "drag children" and prepare them for a one-night-only drag show.

At a glance, We're Here is a queer-led makeover show a la Netflix's Queer Eye -- an established queen takes a shy townsperson and puts them in drag for the first time to help them find their confidence -- but makeup, wigs, and learning to walk in heels are far from the point. The drag transformation is simply a means to an end, with the end being a newly empowered queer community in every town that they visit. 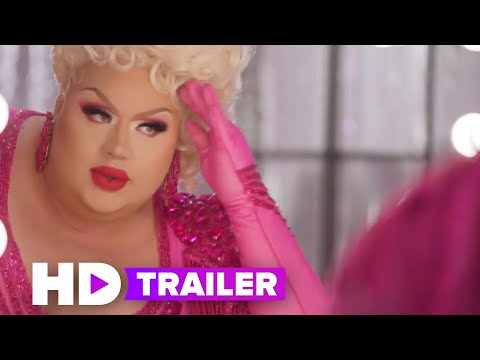 Shangela and Eureka spoke to Thrillist about the impact that We're Here has already made in its first season, which wrapped up on Thursday, June 4. "Interestingly enough, We're Here is not a drag makeover show; We're Here is a real-life series that happens to include a transformation," Shangela clarified. "Drag's not just about the performance. It's being able to say, 'I love myself so much, I have so much pride in who I am and what I'm able to deliver in this world, I'm going to put on this look and I'm going to strut because I don't have to be ashamed. I don't have to be shy. I don't have to be closed off. I can live my life out loud and proud.'"

Every participant in the six-part season brings a different perspective and goal to the drag show stage. Some wanted to perform in drag to show acceptance for their family members; some got in drag to explore their own identities; and some LGBTQ+ allies performed to help break down stigmas for other straight folks in the community. The complicated relationship between religion and sexuality is addressed, race-related struggles are put in the spotlight, toxic gender roles are challenged, and every speck on the rainbow gets airtime.

For example, in episode 3, Bob, Eureka, and Shangela went to Branson, Missouri, the "Live Entertainment Capital of the World" and home to many quietly queer performers because LGBTQ+ people don't have adequate protection against discrimination in the state. They met three men each grappling with muddied views of masculinity and identity that their community had instilled in them. Charles, an openly gay dancer, found himself suppressing his sexuality because of the town's intolerance; Chris, a straight man with a young daughter, fell into depression after bottling up his emotions like he was raised to believe he should; and Tanner, a young guy who previously came out of the closet, then withdrew his queer identity after turning to Christianity and feeling like the two lifestyles weren't compatible.

Eureka believes there's a moral code in today's society that informs how people should look, feel, behave, and love at a young age. "There's a lot of stereotypes, and at the same time there's a lot of people who don't fit that mold," they said. "What's so special about the show is that it's giving voices to people who don't normally get heard." The queens aren't just grooming drag children, they're grooming community leaders who can continue breaking down gender stereotypes and providing queer safe spaces long after the HBO crew packs up.

"It's one thing going into these towns and then leaving," Shangela said. "People see that with makeover shows -- in and out, and then you hope that they feel better." We know by now that upgrading someone's wardrobe and giving them a fancy haircut doesn't do much to make the world a better place; in some cases, it does more harm than good by sending a message that looking polished is the key to unlocking self-love. That's not the case with We're Here. The genuine impact the queens had on not only their drag children, but the town as a whole, is why HBO's take on a "reality makeover show" feels bigger than its more narrow-sighted competitors -- and why it's already been nominated for a Critics' Choice Real TV Award.

"A lot of times small towns get a bad rap like, 'Oh my god, you poor queer person living in a small town, I'm sure you can't wait to grow up and move to the big city where you can be you," said Shangela, who grew up in Paris, Texas, with a population of around 25,000. "But there are people who live in small towns who love living in their small town, and a lot of times, there just isn't a space for queer people and queer allies to come out and be together and say 'I support you.'"

Of course, this is a real, unscripted series, and not everyone in each town responded so openly. As the queens go around passing out flyers promoting the drag shows, they run into plenty of people who show no interest, and in Branson, a business owner called the cops to have the queens kicked off the property, forcing them to leave peacefully despite not breaking any laws. But none of those negative run-ins prevented the drag moms and their children from doing what they set out to do.

"In the first episode I remember telling Bob as she was setting up the stage area, I'm like, 'Baby, you don't have to leave all that standing room, this isn't a regular drag show it's not going to have tons of people standing and jumping and screaming,'" said Shangela. However, when showtime rolled around, there were so many people from Gettysburg, Pennsylvania, lined up to watch that they couldn't get everyone inside the historic distillery-turned-gay club. That's when it became clear that We're Here was going to do some real good.

Even through a screen, viewers can see that the connections formed are genuine, a byproduct of mutual openness that doesn't disappear when the cameras do. "I didn't expect to be that vulnerable, you know, in doing this show, and it's just been really beautiful," Shangela said. "Those are all my children now, and I feel like I had a little part in seeing them grow to that place they were at, that level of happiness, the freedom."

For a number of reasons (e.g., COVID-19, Drag Race Season 12, the launch of HBO Max, nationwide protests), We're Here aired all six episodes mostly under the radar, but the people who watched are already demanding more. "It's not the kind of show that you can pick apart. It's not about drama, it's not about shade, it's really about love and telling stories that people get emotional to and can relate to," Eureka said. Luckily, HBO's already confirmed that they're here to stay -- at least for another season.

The drag community is being hit with hunger after COVID-19 shut down nightlife nationwide. Feed the Queens, a new initiative led by Shangela and the Actors Fund, aims to raise $100,000 to provide over 1,000 queens with grocery store gift cards. Applications are open, and donations can be made here.

Kyler Alvord writes stuff about things at Thrillist. Find him on Twitter and Instagram. Or don't. It's really up to you.