What the Hell Is Going On in 'Westworld'?

This post contains major spoilers for the premiere of Westworld. Head to our show page for more Westworld reviews, theories, and deep dives.

Michael Crichton's 1973 sci-fi movie Westworld was a total tease. In the cult classic, unsuspecting patrons who'd come to the adult amusement park for its robot-delivered pleasures exit in body bags, thanks to a glitch that causes a Terminator-style android meltdown. Crichton's look at our exponential relationship with artificial intelligence was intriguing then and prescient today -- the hows and whys are endless. That's where HBO's new show picks up.

Westworld, adapted by Jonathan Nolan and Lisa Joy, is not a direct continuation of Crichton's original, but it dives back into the world with an appetite for questions, mystery, and epic storytelling. The premiere is rich and methodical, introducing characters in both the fabricated Old West theme park and the Silicon Valley-inspired workplace that runs the day-to-day. Nolan and Joy detail how such a park could feasibly exist -- when is Disney World going to start sculpting horses out of resin?! -- while managing to keep plenty of threads left unpulled.

Where will Westworld go over the course of 10 episodes that Crichton couldn't get to in his 88-minute movie? Let's look at six paths the series could take in Season 1... and beyond.

Westworld isn't a theme park, it's a video game

On the surface, the Westworld tourist experience is like the ultimate Renaissance Faire, with six-shooters and 10-gallon hats replacing bastard swords and shining armor (though clearly this is not set in a future in which Game of Thrones was a hit show, or the amusement park's operators might have swapped out the Wild West in favor of an actual Ren Faire theme). We see visitors step off a 19th-century locomotive and into the Deadwood-like town of Sweetwater, where dreams of downing whiskey mid-shoot-out come true. Bros looking for a fantasy bachelor party pay "tons of money" to hook up with Westworld's state-of-the-art robo-prostitutes. The daring can venture outside of town -- "past the river," as the father of a visiting family insinuates -- for a seedier adventure. Still, the guns of the robot "hosts" only blow smoke, while the "newcomers" are all dead eyes.

There's something more meaningful happening in Westworld, and The Man in Black (Ed Harris) is determined to find it. "There's a deeper level to this game," he tells Kissy the Card Dealer, just before scalping the poor robot on the edge of a cliff. The Man in Black has a history with Westworld (more on that in a second) and regards the simulator like an open-world video game. Where other visitors see the surroundings as a freeform animatronics ride, he sees them as NPCs written as adversaries, emoting to heighten the stakes, programmed to win or lose.

While first writing Westworld, Nolan revealed that games like Rockstar Games' sprawling Red Dead Redemption and the popular Orwellian steampunk RPG BioShock were every bit as influential on this series as other movies or TV shows. This is all the more apparent in The Man in Black's quest, which kicks off at the end of the premiere episode when he discovers something inscribed inside Kissy's skull. The image looks like a map, with a Kokopelli-like Vitruvian Man at the center. Expect Season 1 to chronicle how the Westworld was "won."

The year in which Westworld takes place is unclear, though time plays a unique role in the drama of the premiere. Early on, The Man in Black tells Dolores (Evan Rachel Wood) that he's been coming to the park for 30 years, and that he has a long-standing relationship with the farm girl. "Thirty years ago" is also the last time Westworld had a notable "failure," according to Bernard (Jeffrey Wright). The last beat of the episode is the revelation that Dolores is the oldest "host" at the park. "She's been repaired so many times, she's practically brand new," says Stubbs (Luke Hemsworth), head of Westworld security. All of these mentions pile on top of an easter egg: when Stubbs and Bernard take the elevator down to retrieve Dr. Robert Ford (Anthony Hopkins) from his palaver with "Old Bill," they enter B83, a long-forgotten atrium complete with "Delos" globe. Delos was the name of parent company in the original Westworld movie.

What went horribly wrong 30 years ago? Was The Man in Black directly involved? And do the answers cleverly tie back to Michael Crichton's original story?

Robert Ford breaks the barrier between man and machine

Ford admits he's playing a dangerous game in the premiere. He's almost done with robotic innovations because, frankly, there's nowhere left to go. With the development of the "reveries," the hosts' memory-like recall that allows them to dredge up events from past storylines, artificial intelligence is all but real intelligence. "One fine day we'll resurrect the dead," Ford says, "call Lazarus from his cave." The suggestion is beyond the scope of his work with Bernard; Ford's not only replicating human gesture and experience in the "lives" of his robot creations, he believes they'll one day replace our dead, providing immortality to those with the cash. Might make a good prize for the players who crack Westworld's hidden puzzle.

Westworld is a test ground for... something more

There are layers to the interior Westworld experience, the path that The Man in Black is taking, and there are layers to the exterior Westworld operation, an HQ where quality-assurance manager Theresa (Sidse Babett Knudsen) and "narrative" writer Lee (Simon Quarterman) oversee from afar. Between the bureaucratic office work debates, Theresa tugs on a thread that could eventually unspool everything we know about Westworld: "This place is one thing to the guest, another thing to the shareholders, and something completely different to management."

Lee would prefer that Ford quit improving the robots, because he doesn't think they need to be that lifelike in order to enthrall the well-heeled visitors. But someone in the shadows needs the AI to evolve. In the Crichton-adjacent Jurassic World, the government saw rebirthed raptors as rebirthed raptor super-soldiers. Westworld's robots could have the same potential in the eyes of unknown moneymen. Or maybe someone pulling the strings wants to live forever inside one of the 3-D-printed hosts. Anything's possible.

Someone on the outside wants to break Westworld

Between the next-level reveries and a bug in the upgrade, the strings that keep the park's robot puppets in place are beginning to snap. There's no bigger clue than the photo Dolores' father, Peter Abernathy, finds buried by his cattle pen. It's a sight he's never seen before: a woman in a puffer coat, standing in a metropolitan area resembling Times Square. The photo dislodges a few of Peter's screws. The question is: how did it get there, and who wants to disrupt the order? Bernard is a prime suspect to have planted the photo -- he's tight with the robots and obsessed with the tiny motions that "make them seem real, that make the guests fall in love with them." Or maybe it's his apprentice Elsie (Shannon Woodward), who sneaks a woman-on-robo-woman kiss in the premiere.

Dolores will lead a robot uprising

Ford is an artist, and Peter Abernathy, a former cult-leader-bot-turned-farmer-bot, is his work of art. Which is why he's built to quote Shakespeare -- or at least the Bard's most ominous lines. "These violent delights have violent ends... " Peter says, drawing upon one of Romeo and Juliet's most threatening beats. For those who are less familiar with Act 2, Scene 6, it continues, "... and in their triumph die, like fire and powder, which, as they kiss, consume. The sweetest honey is loathsome in his own deliciousness and in the taste confounds the appetite."

The violent delights of Westworld will have violent ends. It's the basis of Crichton's original movie, and it's the most obvious tease in the premiere, from the "wouldn't kill a fly" motif to Dolores' mention of the "Judas steer," that one calm, aware bovine who can lead the rest of the herd to the slaughterhouse without human assistance. Judging by her tolerance to flies at the end of the episode, Dolores will likely be the Judas steer who slams the brakes, and leads the herd in another direction. "Have you ever questioned the nature of your reality?" her superiors ask her, while she sits in answer mode limbo. They're asking for it.

But how far could the mayhem go? If Dolores becomes sentient, revolts, and sets Westworld's 30-year "without incident" counter back to zero, how will it impact the nature of show? Could a true uprising revert the real world back to... the Old West? 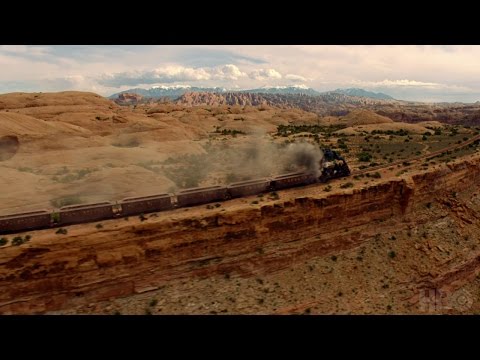 What the creators are actually saying

In a post-premiere interview with Entertainment Weekly, Nolan and Joy shed some light on what we saw -- without giving anything away. While the two acknowledge the series takes place in the 21st century, they're coy about the specific year. Same with the relationship between the command center and the park, and if, like Crichton's original film, there are other robotic themes playing out in unseen sectors of the map.

Nolan did open up about the central conceit of the series. Or as he puts it, "the Freudian-Jungian stuff" inside the human brain, and how it has to be expertly constructed inside a robot. "How much [the robots] can remember is an important question for the season," he says. "The ability for the technicians to directly query the subconscious of the hosts was such a fun way to play this dynamic and also hint at the levels of sophistication and control that are latent in the host that they’re not allowed to access. So, no, they’re not aware of their plight. They are aware on another level, but they are forbidden from accessing it."

While the internet debates whether the flies are literal "bugs in the machine" and goes frame by frame to figure out if the show is a direct sequel to the 1973 movie, you can check out some cold, hard spoilery facts in the the form of the above series promo, directly from HBO. Ride on, cowboy.