What the Hell Is Going on in 'Westworld' Season 3?

Spoilers up through the most recent episode of Westworld follow. You can also read about what's at stake in Season 3 and visit Westworld World, the hub for our obsessive coverage of the entire series.

The third season of Westworld is not a complete reset of the series' premise. Violent delights will still, apparently, have violent ends. But the Season 3 premiere did offer a new angle on this tale of robots and their consciences. First of all, we've left the park behind -- at least for now. Evan Rachel Wood's Dolores has ditched her Western wear and is donning little black dresses to exact revenge on men who abused her during their vacations. She has also set a bigger plot for world domination in motion, but her exact plans have yet to be fully revealed. As is typical of the show, each episode ends with more questions than answers. We'll be diving into some of the biggest mysteries throughout the season. Are you ready for this analysis? 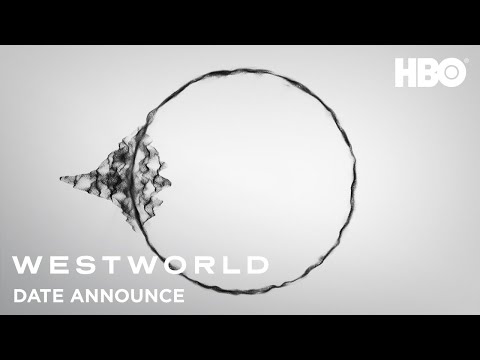 What do those interstitial graphics mean?

We first got wind of these eerie dot graphics in the date announcement promo that HBO released in January. In the teaser, the peaks indicated future "divergences" like the assassination of the president-elect of the United States on December 9, 2024 in Buenos Aires. Two key bits of info that seem relevant to the plot come later: "System Initiated" in an undisclosed location on April 17, 2039, and a divergence in an unknown location on February 27, 2058. When the graph appears on screens during the premiere, indicating divergences and anomalies along with locations and coordinates, no dates are listed, perhaps as a misdirect. Still, what constitutes a divergence? Or an anomaly? What exactly are we looking at here? This may have something to do with the computer Rehoboam and "the system" we're introduced to, but so far, it's unclear.

When does Season 3 take place?

"When?" is the ultimate question in Westworld, right? The show's first big twist was that the entire first season took place in alternating timelines. The second season complicated that even further. While there's nothing to indicate anything like that is going on this time around, the bigger query still stands. It looks like, at least in the cold open, the massacre at Westworld happened fairly recently, at least according to a headline seen on someone's screen: “Bloodbaths at Delos park.” Meanwhile, the Delos shareholders are debating whether to shut down the park division. But we seem to be in 2058 based on promotional materials for the season and the hashtag the cast is using. That would (maybe!) be about six years after the timeline we were following the last time we checked in on our robot friends who want to kill us all.

What are the pills everyone keeps taking?

In that opening sequence we see the shitty guy Dolores annihilates take what looks like to be some sort of tablet or pill. Later, Aaron Paul's Caleb gives his mother the same thing. What exactly do these things do? They seem to help people fall asleep, but who knows.

What's up with the new opening credits?

Bye bye, buffalo! There are some new opening credits, which presumably hide a bunch of secrets. Why a dandelion? What's the significance of the eagle? Or the water? Time will only tell.

What war was Caleb in?

One of the first things we learn about new character Caleb, played by Breaking Bad's Aaron Paul was that he was in the military. But where was he serving? It turns out that his friend Francis, who he has been talking to this whole time, is actually dead. He died in combat and has been brought back to life by some sort of AI system. But what conflict did these two see? And is it related to Delos?

Who runs the Rico app?

The app that Caleb uses to make some extra money through crime is admittedly goofy as hell. It's called "Rico" and when you log on a woman in a balaclava and a bikini (a la Spring Breakers) says, "Make money, motherfuckers." But who runs this app? Is it related to anything else going on? And where do you get Marshawn Lynch's cool-ass T-shirt that lights up a word depending on his current emotional state?

Who is in Charlotte's body?

Surprise! It's Dolores. The fourth episode of the season reveals that basically everyone...is Dolores. Instead of bringing along a bunch of her host friends from Westworld, Dolores just brought a bunch of copies of her self and stuck them in other bodies. So Charlotte is now Dolores. So is Musashi from Shogun World. So is Liam Dempsey's bodyguard-turned-host Martin Connells. So many Doloreses. All around.

How much of Charlotte is in there?

Even though Charlotte's body is being used as a vessel for a Dolores host it appears that at least some of the old Charlotte remains. Present-day Charlotte, whoever she may be, has forgotten some key things about the person she is playing: Namely, that human Charlotte had a kid. However, the more host Charlotte starts to replicate her body's former life, the more we begin to question who she really is and where her allegiances are. “It’s like she’s trying to take back control," host Charlotte says at one point of human Charlotte.

Who is Dolores' new boyfriend Liam Dempsey and who is his father?

Dolores has made one of her targets Liam Dempsey (John Gallagher Jr.), the somewhat clueless son of a tech titan who works as a "technologist" at his dad's company Incite. While we don't meet his father in this episode, his dad is Liam Dempsey Sr., played by Jefferson Mays, who promises to loom large over this season if this teaser is any indication.

At the heart of Incite is something known as "the system," which is crucial to Dolores' machinations. It's called Rehobaum -- named for the son of Solomon -- and as Dolores tells Caleb it essentially tracks every move you've ever made, and makes a prediction for your life. Caleb, it predicts, will commit suicide. It means that Incite can write off a human being if deemed not worthy enough for an investment. But how can Dolores gain control of it?

Why is Maeve in a WWII park?

Because no one can resist a post-credits scene these days, the Westworld premiere gave us one featuring Maeve, one of the main characters missing from the rest of the episode. The last time we saw her she was not functional, and here she wakes up and finds herself in what is apparently War World. However, in episode two she figures out that she's not actually in a park at all. She's in a simulation meant to keep her in submission, which raises the question…

When does the simulation end?

Maeve seemingly escapes by figuring out that she can stop all the other simulated hosts in their tracks by essentially confusing them. But by even introducing the idea of a simulation we're left to wonder: What else could be a simulation? Shakes fist at sky: "Westworld!"

Is Westeros a park?

The brief shot of Game of Thrones creators David Benioff and D.B. Weiss as Delos technicians working on a dragon that looks an awful lot like Drogon, elicits the question whether there's a Westeros park or whether maybe just all of Game of Thrones was happening inside the Westworld universe. Makes you think.

What is Bernard missing?

Bernard heads back to Westworld to make sure no one, mainly Dolores, has tampered with his code, and makes some startling discoveries when he's there: Mainly that he's, well, missed a lot. But his new companion Stubbs, also a host, makes him cut his journey of self discovery short. So what else doesn't he know?

Who is Vincent Cassel playing and where is he?

Well, first things first, the Benioff and Weiss cameo might have actually provided us with some key information or their chit chat could be another joke. In the scene they are talking about a "buyer" that's a "start-up out of Costa Rica." Seems like they are sending all the hosts there. Or at least that Drogon replica. So maybe Cassel's character, named Engerraund Serac, is based out of Costa Rica. Or maybe it's an in-joke about Jurassic Park's Isla Nublar. Jurassic Park is, after all, another Michael Crichton invention.

After her attempt to flee via Maintenance Drone, Maeve ends up in a tropical locale with a new dress and a new hairdo under the watch of this man. (Engerraund! Serac! What a name!) He has reprogrammed her so that her ability to resist the commands of humans is now gone. How was he able to do that? And who, exactly, is he?

Episode three provides some more information, but not much. Unbeknownst to most of Delos, Serac is the richest man in the world and he's staging a hostile takeover of the company with help from a few moles. One of those moles? human Charlotte, even though host Charlotte does not remember how she is involved.