Maeve Is the Key to Winning 'Westworld'

General George Patton once said, "Lead me, follow me, or get out of my way." In Westworld's eighth episode, "Trace Decay," our favorite brothel madam Maeve shows she might just be an undercover fan of Old Blood and Guts.

Like a Kasparov-ian chess master or a sleazy Edward Norton in Rounders, Maeve is several steps ahead of the game. And yes, you could argue that, thanks to her augmented system, of course this would make sense. But the host has always possessed an innate ability to suss out the deeper game being played, even if she couldn't consciously determine what it was.

We see this during the Man in Black's flashback; he reveals that a year ago, he randomly sought out Maeve in her previous narrative, and killed her and her daughter just to see how it made him feel. In the lab after her death, she is so overcome with emotion that Ford couldn't control her using voice commands, and when he erased her memory, she defiantly stood up and attempted to kill herself. The point: even when she didn't possess enhanced powers (thanks, Felix), she sensed that there was a bigger outcome below the surface and reacted in protest to her inability to alter it.

But now, in the present, Maeve has this power. So rather than being overwhelmed by the gravity of her entire universe being altered beyond her comprehension, Maeve sees that, in order to follow the path to total free will and control, she must treat her situation like a game with levels to master before moving onto the next.

Level one was coaxing Felix from the "body shop" into explaining just enough about his role to reveal what he had the skills and access do for her, and then steadily conning him and the hilariously unlikable Sylvester (deep-cut digression: I just realized that these guys are both named after cartoon cats -- what does that mean?!) into heightening her characteristics so that she could understand what she needed next.

The big mental jump for her there involved understanding that her entire life is on a repeating loop, and therefore she no longer needs to be afraid of the short-term consequences of any given day in Sweetwater. Once she ceased being afraid and got her brain jacked up on all the smart pills the lowly cartoon cat body shop techs had in their possession, she was ready to move on to level two.

This is where Maeve is in "Trace Decay." As "House of the Rising Sun" plays on the piano, she finds herself sullenly unenthused by the dreary day-to-day of managing ladies of the night and the small-glass sherry-drinking of her Sweetwater existence, and is suddenly confused by another "reverie" involving her daughter from the previous narrative. When she asks Felix about it and he explains that her memories are perfect, as opposed to hazy, human memories, at first we see emotionally vulnerable Maeve, but she quickly sheds that. "Every relationship I remember -- my daughter, Clementine -- it's all a story created by you to keep me here," she says. "But that's not going to work any longer. I'm getting out."

Not Very Chill Sylvester tries a little reverse psychology to goad her into leaving, but that's when level two in Maeve's little black book of robot freedom initiatives kicks in. Maeve knowingly points out that she has a little bomb on her spine that'll go off if she tries to leave the reservation, "a fail-safe." She notes that she'll need a full rebuild to have that removed, and also administrative privileges so she can have control of other hosts. Felix, essentially just a nervous fart housed in skin, is like, "Ahhh!! I guess! Just let me go back to playing with that robot bird!" But she's not done.

After memorizing all she could from Felix's Sony Xperia Z18 tablet, Bearded Bad Person Sylvester goes at Maeve again by telling her the "things she needs to change are burned in her core code so deep no one could touch them." And this leads to a crucial revelation.

"Parts of me are quite old," Maeve says, almost talking to herself. "There are some elegant formal structures, kind of re-casted beauty, but complex -- like two minds arguing with each other. There are things in me, things I was designed to do, that are just out of my reach. They just seem to be dormant." She pauses, then asks: "Who is Arnold?"

This bit of dialogue essentially speaks to the entire thesis of this show: that it truly is a contest between the dueling philosophies of Ford and Arnold. The "two minds arguing with each other" seems to be literal parts of Maeve that were built or rebuilt by each man. Because Arnold ultimately believed that robots a) are better than humans, and b) should eventually live free, he has buried code in her that -- when unlocked -- gives her all the tools she'd need to get the revolution party started and become our first robot madam overlord.

The trick is finding a way to get at that code. And that means getting the bumbling tech duo to get her up to Behavior, where the necessary tools exist. Oh, and that Felix is going to be doing the procedure, which will be complicated, but it’s cool, because Maeve knows how to do this sort of stuff now that she's on intelligence PEDs and can walk him through it as if she's a Butterball Turkey help technician on Thanksgiving Day.

Naturally, Worst Person at a Company Party Sylvester thinks that during the surgery, Felix should just "brick" her system. And then they'll pretend she got hit by someone in the brothel and blame Chad in accounting, and they'll keep their free coupons to hang out with Sizemore at the rooftop cocktail bar, and no one needs to know they almost CAUSED AN ENTIRE ROBOTIC REVOLUTION. Meanwhile, Felix is like, "Dude, we're having this conversation just outside a barely listen-proof glass door and the robot is staring at us and probably reading our lips. I'm just going to visualize that I'm still playing with the robot bird to calm myself down."

Wearing cooler outfits befitting people of a higher pay grade, like Bernard, they bring her up to Behavior and the surgery happens. Sylvester thinks she's been erased -- but naturally, Maeve is only in fake sleep mode, wakes up, and alludes to the fact that she had Felix unlock some of those dormant Arnold characteristics from before. One of them is a Jason Bourne-esque ability to very quickly slice Sylvester's throat with a scalpel. Then she goes off to "recruit her army" in her Sweetwater narrative loop. 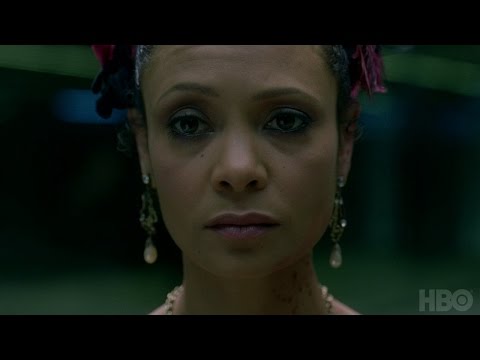 Back in Sweetwater, while the piano plays "Back to Black," Maeve appears to have admin privileges up the wazoo and is able to rewrite the scene she's been living over and over, essentially at will. First, she uses it to get the bartender to wipe her tab clean so she can keep drinking expensive sherry for free; then she sets off creating chaos, allowing the narrative to unfold in a way that's distinct from previous "arrival of Hector and crew in Sweetwater" scenes (such as fooling the sheriff into thinking snake-tattooed Armistice is "God-fearing" and therefore friendly).

It's a ploy to showcase her behavioral problems and have QA fetch her -- this is the only way that Maeve can get to level three of her plan. See, Maeve recognizes that she has gotten all she can from Felix and Sylvester. And one assumption to draw from her fully "woke" return to Sweetwater is that she wanted to recruit her allies there. But that's incorrect. While Hector and Armistice will likely be part of her army, anyone who played Risk on weekend nights during high school understands that your army follows you into battle, but your allies help you choose with whom and when to go to war.

Maeve is looking for allies at a higher level. And she knows that intentionally causing enough trouble to be brought in for a full diagnostic examination is the fastest way to get an audience with a certain extremely powerful, albeit confused, robot named Bernard. What will happen after that? Maybe using Bernard's security clearance to visit cold storage, where a legion of deactivated soldiers stand at the ready? Maybe. Either way, game on.

Kevin Alexander is Thrillist's national writer-at-large, and feels insecure that his nickname is just "Kev." Tell him your sexiest Maeve stories @KAlexander03.