What Cheesy Sci-fi Movies Think Will Happen in 2017

For many Americans, life after November 9th has felt like a genuine dystopia. But while the pollsters and pundits got 2017 tragically, horrifyingly wrong, a despairing brood of science-fiction pessimists saw it coming -- on a symbolic and metaphorical level, at least.

1987's The Running Man takes place in the then-far-away year of 2017, and would seem eerily prescient in light of Donald Trump's election even if it did not contain extremely quotable, extremely timely lines like "Get me the president's agent!" and "Truth hasn't been very popular lately." While our future looks substantially less like a cross between Solid Gold and American Gladiators, the film, based on a novel by Stephen King (as Richard Bachman), captures the sense that in both the reel and real 2017, the lines between entertainment, justice, and politics have become hopelessly blurred. Hell, in Trump's America, the lines between entertainment and everything are fuzzy to the point of meaninglessness.

In the gloomy world of The Running Man, the government, in collusion with sinister producer and host Damon Killian (Family Feud's Richard Dawson, in a brilliant exercise in devastating, fearless self-parody), distracts the masses from their miserable lives under authoritarian rule by mounting "The Running Man," a ghoulish yet popular reality competition where convicts risk death in a series of brutal physical challenges for the sake of a potential pardon, or less.

Arnold Schwarzenegger stars as Ben Richards, a man framed for a massacre who becomes an unwitting contestant to save himself and his friends. The bloodthirsty sport at the center of the film is like a survival variation on The Apprentice, only with higher stakes and kill-or-be-killed competition. Meanwhile, in our real 2017, Schwarzenegger stands to inherit The Apprentice from our president-elect. 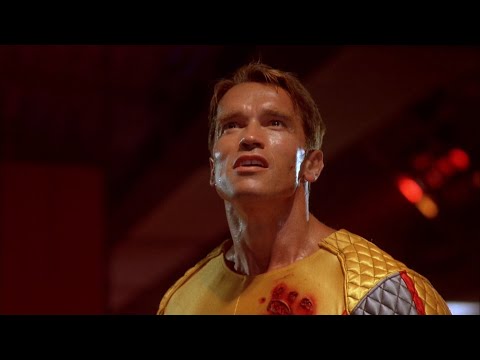 It's sad and a shame that the dystopian visions of yesterday's speculative science-fiction writers are preferable to our actual dystopian present in some ways. In The Running Man, for example, the public immediately turns on Killian once they see and hear leaked footage revealing him to be a brutal, heartless, lying monster. In our dystopia, we heard leaked footage revealing the next president being even more disgusting than we had imagined, shrugged our shoulders, and voted him into office all the same. We essentially made Damon Killian president, leering eyes, grabby hands, smarmy personality, cheesy showmanship, and all.

1996's Barb Wire, which also takes place in a creepily prescient 2017, stars a woman whose outsized proportions would please ghoulish predators like Richard Dawson, Damon Killian, and Donald Trump: Pamela Anderson Lee, at the height of her buxom fame. In Barb Wire, Lee plays a Trumpian ideal, a small-businesswoman and gun nut who looks like a Tex Avery caricature of a sexy woman. 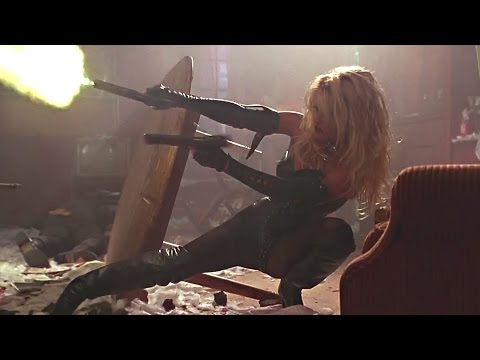 Trump's vow to "Make America Great Again" was really a promise to return our country to its past. Accordingly, Barb Wire occupies a curious time warp that extends to the future/our present. The film is an adaptation of a Dark Horse comic book/character but it is also an unofficial, unlicensed quasi-remake of Casablanca with Pamela Anderson Lee in the Humphrey Bogart role.

The film's version of the city of Casablanca is Steel Harbor, a desperate place for dark, troubled, and lost characters. It's a violent, sexually overcharged war zone, not unlike how Trump has depicted all of our inner cities. As in The Running Man, the government here is authoritarian and cruel, but even more nakedly fascistic in its fashion sensibility.

So while Barb Wire might inhabit the far-out, futuristic world of 2017, spiritually, at least, it's stuck in 1942, and the romance of a world at war and star-crossed lovers trying to reconcile their ideological beliefs with their personal passions. It even has Udo Kier as Barb Wire's sidekick "Curly," a bald-headed gent who looks like a cross between Casablanca's weaselly Peter Lorre and a sentient, six-foot-tall penis with eyes.

Trump implicitly promised to bring back the wholesome, impossibly idealized Eisenhower America of the 1950s, but he overshot and instead brought back the culture-wide fear and panic of Nazi Germany, World War II, the Red Scare, and the Japanese internment camps.

Barb Wire's vibe, then, is equal parts Nazi Germany, or at least Nazi-controlled territory, and Trump's 2017. It's the worst of both worlds, so if you are looking for reasons to feel optimistic about our nation's future in the pop-culture detritus of the past, these two weirdly prescient, appropriately vulgar portrayals of the madness and division of 2017 offer more reasons to despair than to feel hopeful.

Nathan Rabin is the original head writer of the A.V. Club and the author of several books, including 7 Days in Ohio: Trump, the Gathering of the Juggalos and the Summer Everything Went Insane. Follow him on Twitter @nathanrabin.