You probably didn't see Will Smith's latest drama this weekend. Not many people did. In Smith's worst opening ever, Collateral Beauty made $7 million over three days of facing off against Rogue One, a $3 million step down from last holiday season's Concussion, which was his previous low-water mark. But here's the craziest thing about this wannabe tearjerker: It's legitimately the most bizarre movie of the year, and of Smith's entire career. Not in a good way.

On the surface, Collateral Beauty looks like yet another inspirational weepie from the Suicide Squad star, a mode he's explored to varying degrees of box-office (and critical) success in movies like The Pursuit of Happyness and Seven Pounds. If you watch any of the film's trailers, it looks like a modern-day update of A Christmas Carol with some of Crash's "everything is connected" schmaltz to hold it together. Like a big-budget Hallmark card.

Here's what the trailer promises: A grief-stricken advertising executive (Smith) writes angry letters to three abstract concepts ("Love," "Time," and "Death") and receives visits from physical embodiments of these ideas played by Helen Mirren, Keira Knightley, and Jacob Latimore. Edward Norton, Kate Winslet, and Michael Peña are also on hand to class up the affair as Smith's co-workers. Again, the whole thing feels harmless. Take a look for yourself. 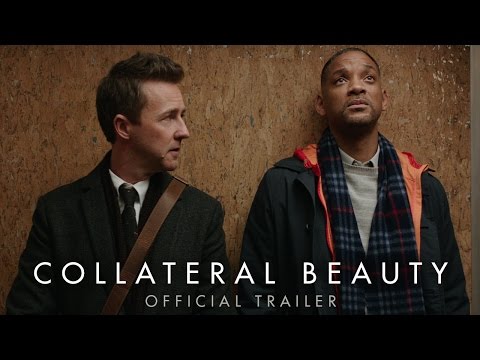 See what I mean? Silly? Sure. Sentimental? You bet. But nothing too out of the ordinary besides so many talented actors signing up for something so syrupy. But the premise teased in the Collateral Beauty trailer is a lie.

Smith's character writes letters to abstract concepts, but the three don't start visiting him in a magical-realist manner. That would make more sense. No, "Love," "Time," and "Death" are actually actors hired by Norton, Winslet, and Peña to trick Smith's character into going insane so that they can take control of their struggling ad company. Imagine if Bob Cratchit hired street performers to play the ghosts to haunt Scrooge. A little fucked up, right?

Collateral Beauty is a movie about a man being emotionally tormented and manipulated by his co-workers. The oddest part is that this story is not presented as a Charlie Kaufman-meets-Mad Men dark comedy about soulless corporate string-pullers. The film's script, by Allan Loeb (21), portrays the deception as sweet and noble, even, and director David Frankel shoots it with an angelic glow. It's like the movie is unaware of how creepy its characters are behaving. (In one of the strangest scenes, Mirren's actress even explains the term "gaslighting" to the advertising executives, and they pretty much shrug.)

But that's not all! The movie also contains a subplot featuring Moonlight's Naomie Harris as a kindhearted woman who runs a support group for parents working through the grief of losing a child. She has a few mildly flirtatious exchanges with Smith's mumbly, despairing ad executive. At one point, she explains to Smith that when her husband left her he said he wanted to meet her again when they'd forgotten their pain. You might have a sense of where this is going.

In the film's last galling twist, it's revealed that Harris is actually Smith's wife. This is all revealed in the most sentimental way possible, with Smith visiting Harris at her home and viewing a home video of her with his own daughter and… I'm not really sure… making the connection himself? In the world of the movie, his time in her grief-counseling group is a courtship ritual of sorts, or a way to coax him out of his amnesia.

Does the film end with Smith finding out that his "friends" at the ad company have been mentally sabotaging him? Nope, of course not. That would make too much sense. Instead, the film's final image shows Smith going for a chipper stroll in Central Park with Harris. He looks back over a bridge and again sees "Time," "Love," and "Death" smiling down at him, and then he looks away for a moment and they disappear, which suggests… I don't even know. That characters we know are actors were actually angels all along? That Smith is now seeing illusions thanks to his co-workers' plan? That the screenwriter had no idea how to end the movie so he just went for something vaguely uplifting?

There are so many unknowns. At the end of Collateral Beauty, only one thing is certain: Paying audiences knew this was one of the worst movies of the year.

Dan Jackson is a staff writer at Thrillist Entertainment, and he's just glad that Collateral is still the best movie with "collateral" in the title. He's on Twitter @danielvjackson.