Netflix's EDM Movie Will Put You in a Trance

When rock 'n' roll first emerged as a dominant cultural force in the early 1960s, beach party movies terrified parents with images of teens wearing skimpy outfits, dancing all night in the sand, and listening to the devil's music. Later, the birth of hip-hop lead to stylish, sin-filled movies like Krush Groove, House Party, and Breakin', while the morose flannel-covered moan of grunge gave us Singles and that scene in Black Sheep where Mudhoney razzes Chris Farley. Every popular music genre gets the zeitgeist-sucking movies it deserves -- and now it's EDM's turn.

Last summer we had the sun-kissed perfection of Zac Efron's box-office bomb We Are Your Friends, and now the streaming club kids at Netflix dutifully drop the bass with XOXO, an endearingly earnest and often silly ensemble dramedy about a group of young adults (played by vaguely familiar young actors, plus one cranky "old guy" played by comedian Chris D'Elia) overcoming great obstacles to attend a giant electronic music festival. It's like Robert Altman's Nashville for the "sun's out, guns out" generation. It might give your laptop a cold sore. It is glorious.

What makes XOXO so special? "This is XOXO, not a party at somebody's mom's house," says a character at one point. Like many of the characters in this movie, this young person only speaks the truth, and you could learn a lot from him. To help you spread the Day-Glo gospel of XOXO, I've broken down important things you too can learn from this mystical, quasi-religious, and very dumb streaming experience. 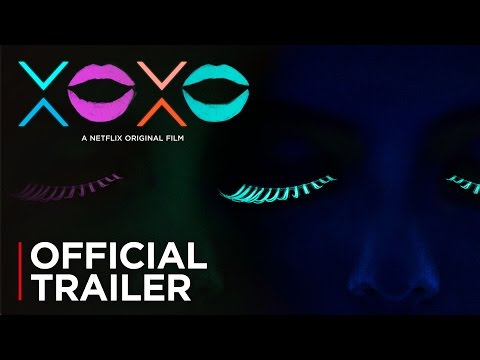 If you haven't guessed, the music festival in the film is called XOXO, and it is a big deal. Like, really big. I know this because the movie told me this many times. "I fucking love you, XOXO," Ethan shouts late in the movie, in case it wasn't already clear that you, too, should love XOXO. Also, XOXO must be cool because all the characters in the movie want to go there, listen to music, and have a transcendent experience. It was founded by a mysterious, reclusive DJ, and it takes place somewhere in California, so, like I said, very cool.

As the movie begins, we meet our fist-pumping young heroes. There's a romantic dreamer in purple lipstick named Krystal (Modern Family's Sarah Hyland), an aspiring music manager stuck working at his father's restaurant (Brett DeBuono), a couple on the verge of a long-distance-mandated breakup (Colin Woodell and Hayley Kiyoko), and a party bus full of tank-top-rocking bros who resemble an army of knockoff Channing Tatums. If all these people want to attend XOXO, you must also want to attend XOXO. XOXO gives you life.

Viral fame can corrupt you

Hopefully, in a few years, all of our movies will be about teens who go viral and get invited to play big, corporate music festivals. Until then, we'll have to settle for XOXO's chronicle of Ethan Shaw, whom we meet at the beginning of the movie when he plugs a thumb drive into his computer and starts working on a sick beat. Later, his mom asks, "How many hits are you at?" and Ethan responds "Almost a million." This viral fame is why the organizers of XOXO have granted Ethan a last-minute slot at the festival. But here's the twist: the festival is today and he's only got eight hours to get there. Hurry, Ethan! The viral clock is ticking!

After his party bus to the festival breaks down, Ethan hitches a ride with some hippies in a van -- proving the movie can reduce other generations to one-dimensional stereotypes as well -- and he arrives with a few hours to spare. Once inside the festival, he meets one of his musical heroes, DJ Avilo (Party Down's Ryan Hansen), who quickly offers him a deal to join his label and collaborate on a track, only under the condition that he abandons his best friend/manager. Oh no. Do you think Avilo's deal is bad and exploitive? Do you think Ethan will learn a valuable lesson about friendship? Does Skrillex have a crazy haircut? (Yes. He does.)

Teens love texting on their phones

Before watching XOXO, I assumed all teenagers only communicated via YouTube comments on elaborate prank videos, video game walkthroughs, and makeup tutorials. I was wrong: teens love texting. The movie's director Christopher Louie conveys this startling truth by filling the screen with little text bubbles when the characters send each other messages, and by having Chris D'Elia's old-head character make dismissive comments about Snapchat. Later, Louie uses a big red arrow on screen to sell a joke about a festival-goer carrying a vacuum for no reason. I don't know why the arrow is there -- that might be some new teen technology I'm unfamiliar with. Do teens love arrows? Is this a new trend? If you know, please contact me via e-mail.

Of the movie's many subplots, Krystal's pursuit of a boy she's been talking to online delivers the most emotional oomph and provides the most concrete lesson you can apply to your own life. Unlike her friends, who take shots of suspicious pink liquid while saying things like "Happy XOXO, ladies! To being young, pretty, not giving a fuck!" Krystal is looking for true love and she thinks she'll find it at an EDM festival. Spoilers: she does not. Instead, her texting bro-suitor only wants to grope her and make out in the Day-Glo garden. Don't meet up with your online lover IRL at a music festival.

Also, the movie's about-to-break-up couple, Shannie and Ray, spend a long stretch of the second act sneaking into the festival by traveling through a sewer tunnel, answering the question of what would it look like if the Ninja Turtles really wanted to see Avicii. Shannie is moving to New York because she took a job at a wealth management firm and Ray still has another year left in school, and this story thread is boring, so I don't actually remember how this plotline gets resolved. I don't think they die in the sewer.

After leaving his father's restaurant behind, aspiring music manager Tariq kisses a random woman in the parking lot of the festival, and she gives him drugs via her tongue, which sends him on a sweaty, filthy odyssey of terror and self-discovery. If he hadn't kissed her, he never would have done the drugs. This lesson should be clear: never kiss anyone. Does the phrase "hugs not drugs" mean nothing to today's youth? Kissing is for perverts and drug-users.

Drugs are bad -- and toilets are magical portals

Making an EDM movie without an elaborate drug sequence would be like making a movie about chefs without a cooking scene, or a Nicolas Cage movie where he doesn't yell at anyone. This is what we're here for. Don't disappoint us. Luckily, XOXO delivers with a credibility stretching drug trip that riffs on Trainspotting's "Worst Toilet in Scotland" scene by having Tariq climb into the mysterious hole at the center of a Porta-Potty and going on a cosmic adventure through time and space. After watching an hour of this movie, I could relate to a character sticking his head in a toilet.

The magic of music heals all wounds

Unsurprisingly, XOXO ends with a big emotionally redeeming concert sequence that displays the communal power of paying lots of money to dance in a crowd and drink $9 beers. Ethan gets to play his viral hit in front of his fans, Krystal gets to make out with him, Tariq proves he's not a bad manager, the bad EDM DJ gets punched in the face, and even Chris D'Elia reunites with an old friend. Everyone gets their moment as pounding music, selected by the movie's presumably well-payed music supervisor (and celebrated DJ himself), Pete Tong, plays on the soundtrack. The values of PLUR (peace, love, unity, and respect) are celebrated by all, and as much as I wanted it, the raining frogs from Magnolia do not make a cameo appearance.

Don't be afraid to just be OK

I'm not going to lie: XOXO is not what I would call a "good" movie. If you're looking for a thoughtful examination of the loneliness inherent in the life of a touring dance music DJ, check out Mia Hansen-Løve's French film Eden. If you're curious about the backstage mechanics of modern stadium EDM, watch I'll Sleep When I'm Dead, Netflix's surprisingly poignant new documentary about hipster-tastemaker-turned-cake-throwing-millionaire Steve Aoki. If you love electronic dance music, go to a club, listen to a record, or buy your own beat-making software.

Despite its flaws, XOXO is admirable for its often misguided efforts to wrap its giddy, flailing arms around a very real cultural phenomenon and give it a big bro-hug. If we put this in disco movie terms, XOXO feels destined to be the goofy, spectacle-driven Xanadu to We Are Your Friends' melancholy, character-driven Saturday Night Fever. It's not extraordinary, but it exists as a quirky document of your average corporate-sponsored EDM hellscape. It's destined to be gawked at, mocked, and puzzled over by the hell-raising children of the future.

None of the characters in XOXO are going to change the world -- they are mostly irritating, shallow, and, in some cases, very smelly, because they were in a sewer -- but without them there would be no festival. The world needs people like them, just like it needs movies like Xanadu, and just like you need XOXO.

Dan Jackson is a staff writer at Thrillist Entertainment and he will watch any EDM movie. He's on Twitter @danielvjackson.
Our Newsletter