Based on the best-selling book by Italian writer Robert Saviano -- the author who penned Gomorrah, which upended the secrets of the Italian mafia, thusly putting him on constant alert for life -- Amazon's new series ZeroZeroZero explores the inner-workings of the cocaine trade and showcases the global communities and all the lives involved.

Between the Mexican cartels that produce the product to those involved in Italy's Neapolitan crime families who distribute it around the world, ZeroZeroZero centers on the Lynwood family, the operators of a successful shipping company in New Orleans. That's their outward appearance, anyway. It turns out, the majority of their profits come from brokering shipments of the white powder. Edward (Gabriel Byrne) is the patriarch and owner of the business; his daughter Emma (Andrea Riseborough) runs things; and Chris (Dane DeHaan) is the younger brother who's kept in the dark -- until a shake-up in the family dynamic, and a threat to their business, shifts the story's course entirely. 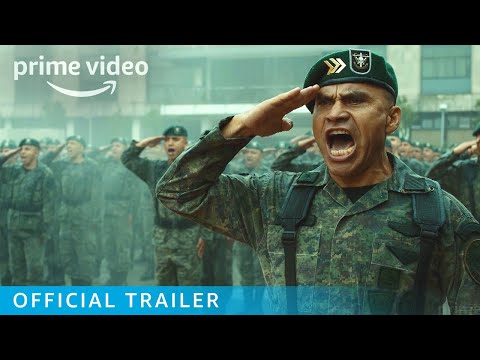 While the subject matter explored in ZeroZeroZero, on the surface, at least, feels reminiscent of The Wire or Narcos, the Amazon series stands out for a couple reasons. First, thanks to the international scope and Italian flair, this doesn't at all feel like a television show. Executive producer Stefano Sellima also directed Sicario: Day of the Soldado and Gomorrah, which lends to the program's deeply intense narrative storytelling.

More importantly, the performances of the ensemble cast elevate the series beyond standard fare TV drama. This brings us to Andrea Riseborough. The actress, who viewers will surely recognize as Mandy, Nic Cage's girlfriend, in the 2018 cult movie hit Mandy, plays a very different type of role here.

What was it about taking on a lead role on television, let alone in a story that's rooted in the unglamorous cocaine trade? Riseborough spoke with Thrillist about shifting from film to TV, the importance of the story being told in ZeroZeroZero, and the necessity of taking sexual currency out of the equation in order to bring Emma to life.

Thrillist: What was it that made you say yes to ZeroZeroZero?
Andrea Riseborough: I think, ultimately it was Stefano [Sellima], the director. I've done so much more film and I'm so much more used to having time narratives and opinions laid out from the outset. So when somebody's trying to pitch you a show, sometimes they can't even give you a script, you know? Stefano has inexhaustible amounts of energy. I really, really liked him and then I got to meet Gina Gardini, our producer, whose mind is really the bible of many of these shows.

And needless to say, Roberto Saviano. One of my favorite films was Gomorrah and when I watched Gomorrah, I hadn't read the book and I hadn't realized where he came from. I hadn't realized that came from Roberto being on the ground and having sacrificed himself and having to put his own safety in jeopardy in order to gain as much true facts he could about Neapolitan crime.

As I understand it, he had to go in hiding after that book came out.
Riseborough: Yeah. Here, he ultimately wants to expose the many lives that the industry of this drug touches that, we might not even realize, touch us. The book, it's from an Italian perspective, but it's really a vast international story with many tendrils that cannot be always pinned down. The whole world is connected through this really lucrative trade.

Lucrative, but terrifying.
Riseborough: I feel like one of the things that I enjoy most about the series -- which is set differently from the book as the book is brutally candid -- is that the cocaine trade is not sensationalized. You get to see what looks like a single mom taking off her clothes, putting it in her locker and going in to make cocaine. It's not an aspirational depiction.

We've seen that sort of thing in movies like New Jack City, but there's no flashy hip hop montages here.
Riseborough: I've only seen [in movies and television] a lot of how many people suffer because of it. I don't think we've seen a lot of the consequences, as to the power, for those who hold the cocaine -- how they use their power on their local communities and how that is so detrimental. So I think, in Roberto Saviano's book and the new series, that's captured. And that was the thing that really drew me, the idea of that, and talking about that with Stefano and [writer/producer] Leonardo [Fasoli] and knowing about Roberto's very conscientious work. All that stuff was what drew me to it, and I was very invested in the idea that we might show a reality as opposed to a somewhat scintillating or tantalizing ideal, you know?

I think the other way you do that is through the character work. Emma, in particular, exists in this notoriously male-dominated space. From her boyish hairstyle, to her toned-down wardrobe, it feels like you developed her to blend in. Is that a correct assumption?
Riseborough: Yeah. Well, one of the really liberating things about playing Emma was that she didn't use sexual currency. I think so often, and sadly and reductively, characters can be delineated into two groups: a villain or a hero. And what I love about Emma is she's not using sexual currency, manipulatively or villainous, as it were. Which is something, I think, we've seen a lot of. There are so many male bodies that occupy that space already.

She's also not in any way apologizing for who she is, what she needs to get done. What I really liked about playing Emma -- because this is her biggest flaw and it's very interesting to play and, from the outside, it's very hard to accept -- is she's not willing to look at the fact that they're cocaine traders. I felt like I really had the opportunity to, along with the team, to create this external character in a somewhat real environment with the facts that we had from Roberto. She's a character who [hopefully] transcends our preconceived stereotypes that we always expect from cinema and from episodic television. And she sort of exists in a space where she was able to live in a world and negotiate without feeling the consequences of her sex. She really was raised as the older brother in the family.

That family dynamic feels authentic to the point that, within the first five minutes of seeing your scenes with Dane DeHaan and Gabriel Byrne, I sort of forgot that you were actors and not actually related.
Riseborough: We worked a lot on that, we talked a lot about it and we had the great privilege, which is so rare to have, to explore it in the few weeks we had in New Orleans. So we established the relationship between Gabriel, Dane, and myself. It was very natural, right off the bat. It really established this sort of dry, cynical, tense, relaxed, tiresome relationship with one another which felt very familial. It felt believable to be inside of so I hope that it reads that way.

Between the global scope of the show, and the cinematography -- which made me feel like I was watching "Sicario: The TV Show" -- the familial dysfunction just fills in the spaces so organically.
Riseborough: I'm so enthusiastic about it! It's such a wonderful thing to be a part of. You rarely have those really special projects in life, you know? Birdman was one, for me. Mandy was another, for me.

If you can imagine being in that many places internationally and so steeped in the culture when you're in them as you are in others, then that's the only thing that I can think to liken it to in its scope. Because it is just epic. I mean, it was astounding to watch it because even though I was there when they were making it, I had no idea how the cinematography would reflect the vastness of the cocaine trade. And I thought that was real genius.

Was there something that shocked you over everything else you explored, whether it was in your character work, the book, or the research you did on your own?
Riseborough: One of the things that surprised me most was the Lynwood family's ability to detach themselves from what they're trading. And that's probably been the case since the dawn of their "shipping company." So that was a bit of the potentially dark history and certainly informed the way that I played Emma.

And aside from that, reading Roberto's book, which I did, because I was about to embark upon this, but thank God I did it anyway. It's just an eye opener! And there really is nothing sensational or glamorous about this trade. The thought that we're going to perhaps make it and it's not going to tell the story about the white powder that you consume on a night out in a major city. Instead, you're going to track that white powder all the way back around the world, essentially, to its origin and see how many lives it touched on the way -- I just could never have anticipated the vastness of it. So that was really heartbreaking to learn all of that. But also, it felt important, and not self important. I couldn't believe I didn't know it.

If ZeroZeroZero got another season, what would you want to see happen for Emma?
Riseborough: I really would love to see Emma go on to become the Don that lives inside of her. I think that would be a fascinating journey. I mean, there are so many phenomenal performances. There's so much longevity in all of these storylines, because these people are probably going to be doing this until the day that they die the way that Don Minu (Adriano Chiaramida) is still doing it as an 80-year-old man in Calabria.

This interview has been edited for clarity.