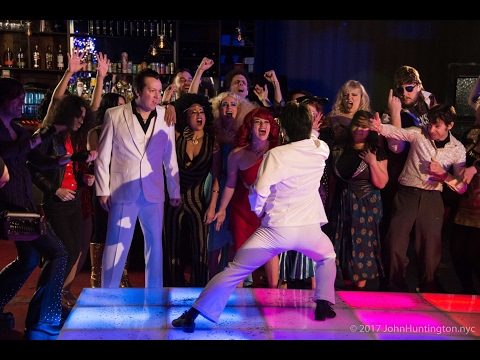 The latest video from heavy metal Bee Gees tribute band Tragedy -- shot locally in support of the group’s upcoming album The Joy of Sex (release party: February 11 at Rough Trade) -- is both an ode to Brooklyn and an unexpected testament to the staying power of New York creatives.

The sizable cast and crew was mainly talented friends and friends-of-friends who despite reports to the contrary still haven’t succumbed to the lure of Detroit. “They talk about New York as being so expensive and all of the artists having moved away,” says O’Shea, “but I have so many friends here that haven’t -- who still create create art and just find a way.”

For a decade now, the disco-hair metal act (whose full name is Tragedy: All Metal Tribute to the Bee Gees & Beyond) has melded the soundtracks of our two most fetishized decades (‘70s and ‘80s) with deafening deftness. The band’s parodic-yet-earnest roots extend back to the late 1990s, when a founding member played with the spandex-clad, faux-mullet-metal band Satanicide. Satanicide played over-the-top, accomplished originals -- “Jer-Z Nites,” “20 Sided Die,” and “Fire’s Hott (Hott Like Fire)” are standouts. But the offshoot project, Hair Supply, started a new cadre of likeminded NYC musicians down the path of infusing classic genre bands with the power of metal.

Eventually, Hair Supply (a hard riff on soft-rock pioneers Air Supply) morphed into Tragedy, cranking the disco kings’ belatedly appreciated brilliance to the proverbial 11 and slyly suffusing ballads and dance-floor jams with riffs from the likes of Led Zeppelin and the Scorpions. (“And Beyond” was added to the longform name in order to justify the metalization of non-Bee Gees numbers like “It’s Raining Men” -- which, with a pinch of Slayer, became “It’s Reigning Men.”)

The multi-talented Hill -- a frequent guest on Comedy Central's @midnight who, among other accomplishments, wrote the theme song to HBO’s Last Week Tonight with John Oliver -- is an old collaborator. Under the name “Craig Mitchell,” he used to contribute to the oddball mayhem of Tragedy’s live shows by standing on the side of the stage doing calisthenics (it made sense at the time). The dancers and choreography came courtesy of Brooklyn troupe The Love Show (The Nutcracker: Rated R; Boomstick Ballet: A Rock Opera Tribute to Bruce Campbell). DP Richard Patterson also worked on the band’s similarly guerrilla-style “You’re the One That I Want” video; AD Anya Garrett, another old friend, had an Upright Citizens Brigade show called “Lasers in the Jungle,” which given the animals there, isn’t a bad place to have a laser.

David Blend has worked at Thrillist since the days when metal was not ironic. He also once attended a wedding that a guy from Pantera was at. Follow him on Twitter.
Thrillist TV
History of
The History of Tailgating