Not many people have the ultimate opportunity to realize their biggest dreams. Even less have it offered to them by their "100% role model in life," who also happens to be the idol for nearly every other kid of similar interest. But for skateboard legend and six-time X Games medalist Paul Rodriguez, better known as P-Rod, this was not only a reality when Eric Koston put a sponsorship by Girl on the table, but the beginning of his own ascension to role model status for future skaters the world over.

Receiving his first skateboard from his father, comedian Paul Rodriguez, when he was 12 years old, it only took him three years to get sponsored and have a video spot. It was truly an obsession; he ate, drank, and slept skateboarding — literally. P-Rod slept with new skateboard products as well as his trophies and such. 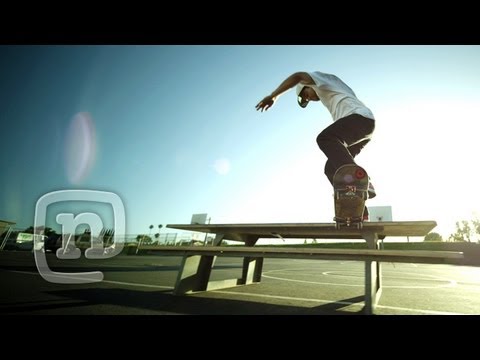 And he now reigns supreme, even selected in Transworld SKATEboarding for the 30th position of its "30 Most Influential Skaters of All Time" list, released in 2011. This kid from Tarzana, California, is doing alright.

GEAR: Nike SBPaul Rodriguez 7 - $90
Thing about skate shoes is that they are not only super comfy, but they are technologically advanced enough to keep your ankles from snapping in half. These are particularly protective with the patented Lunarlon cushioning, which features a soft yet resilient foam core encased within a supportive foam carrier, so impact is spread out and your pressure points are no longer in the line of fire.
P-Rod: I love all of the colors and variety of the shoe and mixing the varieties with what I'm wearing. I like the look and the shape of the toe and the way it skates. It is also available to customize through Nike iD so you can build out your own color ways which is cool.

TECH: NixonThe Blaster - $150
Basically the old school boombox without the cracked sound and checked-luggage weight, this lil' guy streamlines the experience to make it exactly that: an experience and not a hassle or something to worry over.
P-Rod: I love having my Nixon Blaster. It’s nice because it connects to my phone over Bluetooth and has amazing sound so I can listen to it outside, bring it with me if I am out skating or wherever I’m at.

HOME: Outside - $GetSponsored
This dude lives in a twenty- to thirty-something's dreamworld.
P-Rod: There isn’t one thing I love the most. I love being home in general but my backyard is the best spot of the house. I like playing basketball on my own mini replica Staples Center basketball court and being able to walk outside and skate on the set up that I have at home. My sponsors — Nike, Mountain Dew, Target, Nixon to name a few — take awesome care of me and have also helped me build my own private skate warehouse [pictured above] close to my house so I can skate whenever I want.

RIDES:Maybach62S - $TooMuch or $400,000 to $500,000
This was the Concorde of cars while they were still on the line, derived from the Benz Maybach concept car presented at the 1997 Tokyo Motor Show. The concept car was based on the Mercedes-Benz S-Class sedan, voted first place — ahead of Rolls-Royce and Bentley — by the Luxury Brand Status Index 2008. And with production having ceased in the last year, they're all the more desirable.
P-Rod: I don’t have one of these cars but I would love to. The design and technology in this care are insane. Plus, Jay Z has one.

VICE: Saint ArcherBlonde Ale(Left) - $4.99/22 oz. bottle
The 4.8% ABV Kölsch is only available at the brewery or in select stores down in Southern California. It makes sense that it'd come from those parts; the brewery was founded and built on the backs of artists, musicians, and an impressive roster of professional surfers, skateboarders, and snowboarders. And for Rodriguez, the subtle notes of the Earthy beer speaks for itself.
P-Rod: It’s light. And refreshing.

Michael Woodsmall once watched Rodriguez skate in the parking lot of his boyhood local skate shop, after which he went on and tried some of the tricks himself. Needless to say, he was fitted for an arm cast a week later.