The Shoes Tommy Caldwell Wore To Scale The Dawn Wall

The Dawn Wall of El Capitan's southeastern face rises 3,000 feet above the valley floor in Yosemite. For the most part, it resembles a pane of glass from any distance farther than a few meters and is the hardest rock climb ever accomplished. Recently, Tommy Caldwell and Kevin Jorgeson managed to free climb it for the first time, taking 19 days on the ludicrously hard pitch, as the 5.14d slowed down their pace.

Big wall rock climbing is a very equipment-dependent sport—consider the ropes and portaledges they slept on—but nothing was more important than what actually held their feet on the rocks. For this historic climb, clearly only one shoe was appropriate, the La Sportiva TC Pro, designed by Tommy Caldwell himself.

"Dawn Wall brought a focus to my life. For seven years I looked at the world through the lens of what would help me reach this dream," Caldwell told us via email. "One of the major breakthroughs was the opportunity to design the TC Pros." (They were launched in 2009.)

La Sportiva has an enormous arsenal of shoes in its catalogue, but unfortunately—or fortunately, depending on how you see it—it's not as simple as choosing the best footwear. There is no best climbing shoe, only the best climbing shoe for a specific use case, whether it's slab climbing, edging, bouldering, or aggressive crack-climbing.

For a big wall climb like the Dawn Wall, Caldwell wanted the best-of-both-worlds, something which is notoriously difficult. "The La Sportiva designers were shooting for the moon. We wanted make a shoe that was precise enough to stand on the smallest holds imaginable yet comfortable enough to wear all day," he wrote. "A shoe that would hold up to the abuse of big wall free climbing and protect my foot and not compromise performance."

He added: "We went through six prototype rounds and came up with a shoe that surpassed my highest expectations."

In its final form, the TC Pro features a slight downturn, moderate asymmetry, 4-millimeter Vibram XS Edge rubber, and a supportive midsole, which helps calves fight fatigue while standing on tiny holds for an extended period of time.

We're not sure how many he went through from start to finish of this almost decade-long project, but it was probably a lot. 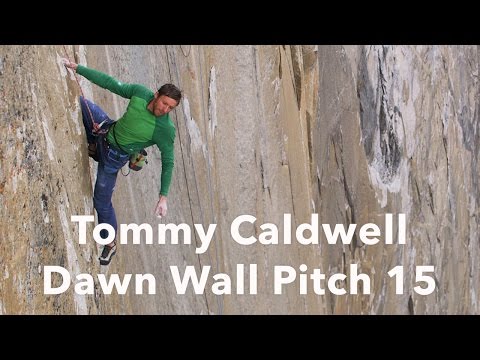 All this paid off, and Caldwell skated through the credit card-sized holds of the difficult 5.14d pitches, finally topping out 3,000 feet above the valley floor without destroying his feet.

"They truly became a cornerstone to success on the Dawn Wall," says Caldwell.

Check out this gnarly video from Patagonia showing one of the hardest pitches, and you can see how hard this actually was.

Ethan Wolff-Mann is an editor at Supercompressor. He believes climbing is a shortcut to old man strength. Follow him on Instagram.