"What has Arnold Schwarzenegger been up to since he left office and admitted to fathering a love child?” is a question that probably doesn't consume your every waking moment, but here's the answer: telling Chinese people to stop eating so much damn meat and eggs. Considering the best Chinese food contains hefty amounts of both, this could be a tough sell.

The former bodybuilder and politician, who hawks things like muscle protein bars and creatine powder, is apparently the best man for the job, along with noted health fanatic and film director James Cameron, of Titanic and Piranha II: The Spawning fame. The duo teamed up with WildAid and the Chinese Nutrition Society to deliver a somber public service announcement warning of the health and environmental dangers of consuming too much meat. Yes, the video involves a blindfold and tons of CGI. 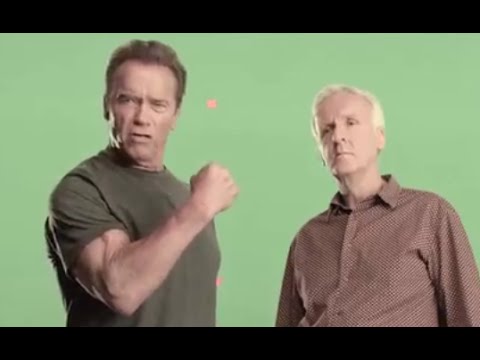 The post-apocalyptic-themed PSA will be broadcast nationwide in China, along with billboards in the same vein. In case people would prefer to hear the message in a language other than Austrian-accented English, or from someone whose physique doesn’t require copious amounts of protein and weightlifting to maintain, Chinese actress Li Bingbing is also lending her voice to the campaign, although not in the above piece of cinematic excellence.

The odd celebrity spokespeople angle comes after China’s government called for less fatty meat and egg consumption in response to a national health crisis. China, the subject of much political handwringing over whether it's "beating" the US, is starting to steal America's thunder in the fat department, too. Diabetes and obesity are spiraling out of control, and more than 25% of Chinese men and women are overweight or obese.

Whether or not Schwarzenegger thinks General Tso's chicken is an authentic Chinese dish is still up for debate, but people in China sure love their animal products (and presumably the Cameron-Schwarzenegger classic, Terminator). The average Chinese person eats 254g of meat and 142g of dairy and eggs a day, according to Quartz. That's a lot. Under the new guidelines, people are urged to scale way back -- to a daily overall total of just 200g of meat, eggs, and dairy. To put that into perspective, 200g = 7.05oz, which is less than the average 8oz steak you’d order as a restaurant entree, if you're fancy like that.

Cow farts are killing the planet

So why did China pick an Austrian-American former bodybuilder/actor-turned-governor and the director who turned him into a movie legend? WildAid, which is spearheading the PSA, reached out to them because of the environmental angle.

Animal agriculture is the second leading cause of greenhouse gas emissions, according to the EPA (yes, livestock farts are silent AND deadly), and environmentalism has always been the Governator’s thing. He signed the California Global Warming Solutions Act in 2006 to help reduce greenhouse gas emissions, and has been outspoken about his part-time vegetarianism for a while. Although he's known for his chiseled bod, Schwarzenegger insists going meatless even one or two days a week will impact the environment, not your six-pack. Since protein consumption is still widely misunderstood, he could have a point.

With the world's largest population, China stands to create a significant global impact if people heed the new regulations. By eating 100g less of meat a day, food-related gas emissions could be scaled down by more than a billion metric tons in the year 2050, a researcher told The Washington Post. The country agreed to reduce their greenhouse gas emissions during a 2015 climate summit in Paris, and less of a reliance on livestock is a giant step in that direction.

Cameron is an environmentalist, too, in case you forgot the not-so-subtle "save the planet while we can" message of Avatar. He's been outspoken about the dangers of climate change since then, most notably in his 2014 Showtime docuseries Years of Living Dangerously.

The ultimate message probably doesn't matter as much as the messenger, and this PSA is late-career Arnold in all his glory. If Chinese people are still worried about less meat impacting their protein intake, they can always purchase several cases of Schwarzenegger's supplements.

Christina Stiehl is a health writer for Thrillist who isn't giving up her General Tso's chicken habit any time soon. Yell at her about it: @ChristinaStiehl.
Our Newsletter