22 Things You Didn't Know About DeLorean

Certainly one of the most unique vehicles ever made, the DeLorean DMC-12 is an enigma in the annals of automotive history. Conceived, designed, and engineered by some of the greatest minds in the industry, it’s perhaps most famous for stealing the show in Back to the Future.

But in reality, it faced egregious delays in the production process, its performance was seriously lacking compared to its price tag, and sales were so dismal that the DeLorean ranks near the ill-fated Edsel and Aztek in the list of automotive disasters. Still, it has a cult following so immense that even today, you can buy brand-new DeLoreans made from leftover parts from 1982.

Take a look back on its amazingly rich (more like riches to rags) history, with these 22 things you didn’t know about DeLorean.

1. The body is made from food-grade stainless steel

Most people know that the DeLorean has no paint, owing its looks to brushed stainless steel. Technically, it’s SS304, which is the same stuff most beer kegs and restaurant kitchen counters are made out of.

2. And terrifyingly, the best way to clean it was with gasoline

If you’ve ever dealt with a stainless steel kitchen appliance, you know how impossible it is to keep fingerprints off it. It’s all good though: per the owner’s manual, just use a Scotch-Brite pad and gasoline to spot-clean the car. Really.

3. The doors have space-age tech developed by the defense industry

Grumman Aerospace developed the doors' torsion bar (which helps with the lifting and lowering) and did most of the manufacturing under cryogenic conditions to ensure longevity. When not working on the DeLorean, Grumman made things like the Apollo Lunar Module and the F-14. 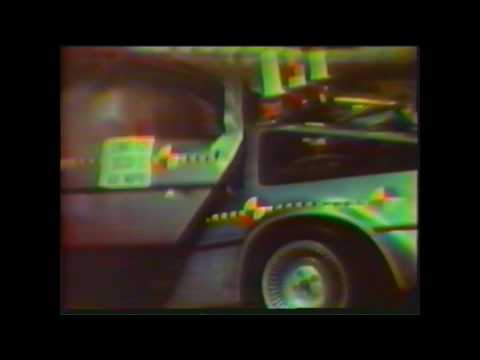 DeLorean originally intended the DMC-12 to be an extremely safe vehicle -- in fact one of the top contenders for the car’s name was DSV, "DeLorean Safety Vehicle." The company even donated two of the early prototypes to the NHTSA for airbag crash tests. The test you’re looking at was done at 40 mph. The results are, well, not what you’d expect from a “safety vehicle.”

6. Before starting his eponymous company, John Z. DeLorean was one of GM's brightest stars

He headed up Pontiac in the 1960s, where he was responsible for the birth of legendary cars like the GTO and Firebird, before running Chevrolet in the early 1970s and making a few enemies at GM along the way.

7. The car’s shape was penned by legendary designer Giorgetto Giugiaro

Even if you’ve never heard of Giugiaro, you know his other works: the BMW M1, Yugo, Lotus Esprit, and Lexus GS all came from his mind, to name just a few.

8. The chassis was engineered by Lotus founder Colin Chapman

Well, it was actually re-engineered by Chapman, because the first design -- by one of DeLorean's ex-Pontiac cronies -- used unproven techniques and likely would’ve been an even bigger disaster. The chassis shares much of its components with the famed Lotus Elan.

9. The engine? Straight out of a Volvo.

DeLorean went through a couple of engine plans, including a rotary engine like you’d find in a Mazda RX-7. But ultimately, a version of a V6 developed by Peugeot, Renault, and Volvo found its way into the rear. Surprisingly, plutonium- and garbage-powered nuclear reactors were never taken into consideration.

10. There are four gold-plated DeLoreans

As part of a not-so-successful campaign with American Express, a couple of 24k gold-plated cars made it into the world, and both are in museums today. A third was eventually made from the spare parts of the first two, and a private businessman actually hired someone to plate his already-finished car gold.

11. When it first debuted, the DMC-12 came with only one option, and it sucked

If you so desired, you could order it with an automatic transmission, though by nearly all accounts it sucked the life out of the car. Eventually, options such as ski racks over the engine compartment and “DMC” decals for the side became available.

John Z. founded DMC in Detroit, and took investment money from people like Johnny Carson and Sammy Davis, Jr. Then around $120,000,000 was put forth by the British government on the grounds that DeLorean build its factory in Northern Ireland. DeLorean accepted, obviously, which scuttled the advanced talks he was holding with officials in Puerto Rico at the time.

The factory was specifically set up to handle a rapid production pace. That number was on par with Corvette in an average year, but reality never came close. Instead, less than 10,000 DMC-12s were produced total.

Initially, demand was high, and the low sales were a result of several delays. But after less than a year, the car’s underwhelming performance began to seriously undermine the initial enthusiasm potential buyers had for the car.

14. The collapse of DMC involved conspiracy theories, government entrapment, and a bunch of cocaine

A complex restructuring deal was put in place, but John Z. needed to raise something to the tune of $27 million to keep things afloat. In a move that couldn’t possibly be more '80s, the FBI busted DeLorean for agreeing to a $25 million cocaine deal on video.

He claimed entrapment -- and his lawyers proved it in court -- but DMC was done for, with DeLorean himself uttering “Would you buy a used car from me?” as he left the courthouse. He also claimed that GM was behind it as part of a personal vendetta against him. That part, he never proved.

15. When DMC folded, Big Lots bought up all the spare cars

At the time, Big Lots was known as Consolidated Stores Corporation, and it was a major investor. When the time came, CSC bought up the cars and sold them itself.

No, not restored, not “like new” -- but an actual brand-new DMC-12 made in Texas from original factory parts. Doing so will set you back north of $65K, but again, with inflation (see above) that’s actually cheaper than it was in 1982.

Granted, that’s not including the base price of the car. And if you’re going that far, you might as well buy all the upgrades, like the pneumatic sounds when you open the door or various other versions of Doc Brown’s creation, like the flying 2015 car, or the one Marty drove in the Wild West.

Actually, the fact that you can buy official DeLorean luggage, but not official Back to the Future luggage to put in your DeLorean is kinda weird, isn’t it?

20. The molds used to shape the DeLorean doors now sleep with the fishes. Literally.

Stamping dies are the extremely heavy bits of metal that are used as molds to shape other sheets of metal into car parts when they're pressed together. The Texan incarnation of DMC bought much of the tooling, but it failed to get the actual stamps used to make the doors.

Instead, they were loaded onto the boat you see above, and dropped into the ocean off of the Northern Ireland coast. They serve as anchors for very large nets as part of a fish farm. For decades, that was merely an urban legend, but in 2000, photographic evidence turned up.

At the height of the DeLorean Motor Company in 1981, Cutty Sark used Johnny Z. for the whisky ad you see above. By Christmas Eve, one year later, DMC was one of the 99 out of 100 failed businesses referenced in the ad. So next December 24th, remember to pour a little out for one of the oddest chapters in automotive history, eh?

DeLorean’s personal finances took a toll in the wake of DMC’s collapse, and by 2000, he had no choice but to sell his 400+ acre estate in New Jersey. A certain presidential hopeful who should carry the toupee demographic bought it... and promptly turned it into a not-too-shabby golf club.

Aaron Miller is the Rides editor for Supercompressor, and can be found on Twitter. He can't fathom the notion of taking a Scotch-Brite pad and gasoline to a car.