It's easy to be cynical, especially on the Internet. With copious videos of "bimbos" (their word, not mine) beating the hell out of each other while white-water rafting, and entitled Connecticut dick-nozzles (my word, not his) demanding mac and cheese at his school's cafeteria, it's easy to be jaded and hardened while perusing the Interweb -- especially when college kids are involved.

But this video of students from Elon University surprising Kathryn Thompson -- who's been working at a campus-based coffee shop for more than 10 years -- with an all-expenses paid trip for her and her Grandkids to Disney World has effectively restored my faith in humanity, and college-aged women in particular. They literally made Thompson's wildest dream a reality. 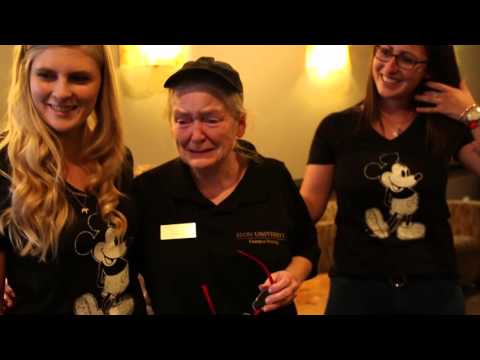 Elon students Taylor Zisholtz and Lucy Smith-Williams spearheaded the project after Thompson revealed her dream to go to Disney World, where she'd never been, with her grandchildren, while the two girls were at the Acorn, the Elon-based coffee shop where Kathryn works.

Zisholtz and Smith-Williams had previously never met, but decided to team up in order to make Thompson's dream come true. They launched a GoFundMe campaign, and were able to raise $6,500 in just three days -- shattering their intended goal.

“Everyone knows Acorn, everyone eats their cookies, everyone’s been there a million times,” Taylor said, according to The Pendulum, Elon's student newspaper.

“It’s Elon, it’s their school, it’s their stomping ground, it’s something they can link to and it’s doing good for someone, and who doesn’t like doing good?” she added. The video above confirms how much the trip meant to Thompson, and just how meaningful this project was, for everyone involved.

I swear I'm not crying guys... I just cut a bunch of onions, and I have allergies, and I've been yawning. Back off, ok?

Wil Fulton is a Staff Writer for Thrillist. He really wasn't crying. God. Follow him @wilfulton


Thrillist TV
History of
Our Newsletter