As a Drag Performer, I Found a Sense of Belonging in Philly

Reflecting on my experience as part of Philly’s ‘big crazy drag family.’

Photo courtesy of Eric Jaffe; Image by Maitane Romagosa for Thrillist
Eric Jaffe is a drag performer based in Philadelphia. They are the co-founder of Jaffe St. Queer Productions, author of The Eric Jaffe Coloring Book, and regularly perform at Fabrika. As told to Allie Volpe. 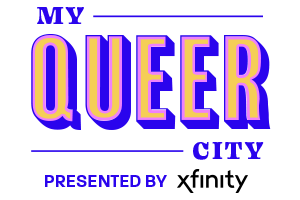 I grew up in Elkins Park and went to Cheltenham High School. Cheltenham is very accessible to the city, so my friends and I would walk to the Elkins Park train station and come down for the day. I fell in love with the city at a very early age. I realized as a queer person that there were more people I could relate to and being around city people made me feel more comfortable.

The people and the performers that I saw when I first moved here were so inspiring. I instantly realized that these people weren’t living by the limitations that had been pounded into me when I was getting my BFA. They were not trying to hide the things that make them beautifully queer. I took movement classes in college where I was told that I walked too queer. I took voice classes where I was told that I sounded too queer. To watch these people take those things and amplify them was inspiring for me to see. You don't have to change yourself to find success in performance.

When I joined the queer scene in Philly, I was the ukulele kid who would do fun covers. As I dipped my toes further into the queer scene, I slowly realized that I was creating a character of myself for the stage. I had been working so long in college on creating the stage version of myself to play all these other roles, but I was finally discovering how to play the character of myself. When I realized there is this glamorous drag monster inside of me just waiting to come out, I was so excited that I could have a space to play with that. Philly is a really great city to give people room to play and explore because there are many different venues, opportunities, and places for us to exist.

The very first queer show that I performed at in Philly and was called the Weird Beard Revue. I never sat and waited around for someone to do things for me, so when I saw there was a show called the Weird Beard Revue and it was a show for bearded performers, I emailed the person who ran it and I said, hey, I would love to be in this show and they gave me a shot. It was hosted by one of my now very close friends, Mistor Fahrenheit. He was a burlesque performer back then and also dabbles in drag. They inspired me to be that kooky version of myself. That show was at L’Etage, which is a cabaret venue in Queen Village. It's a beautiful cabaret space and it gave the opportunity to do any style of performance because the space is made for performance. It's not like your typical bar with a stage in the corner, L’Etage is a space built for performance.

Once I realized that I really wanted to do drag performance, I went to one of my favorite places in the city, Tavern On Camac. They were renovating their bar and I wanted to start a show there. They have a piano bar downstairs and there's always somebody playing. I was a musician at the time, so I thought doing a live singing queer cabaret on the second floor would fit really well. I approached the owners and the managers a couple of times because at first they thought it wasn’t for them. I come from a very pushy Jewish family, and I was always taught if someone tells you no, you keep trying. I kept trying and kept coming up with different concepts and finally they said yes. My show ran at Tavern On Camac for five-and-a-half years and it's still one of my favorite places in Philadelphia. It’s really one of the most welcoming spaces in the city.

I just started working this residency at a bar in Fishtown called Fabrika, Thursday through Sunday. Thursday, Friday, and Saturday they have this Cirque du Soleil-style show that has everything from drag to aerialists, contortionists, jugglers, and circus acts. On Sundays, I curate and run a drag brunch. It’s not a gay bar, but it is a bar that is very queer-friendly and has hired many different queer people as performers and other roles. It’s very glamorous and big and beautiful and has provided really well-paying opportunities for a lot of people in the scene.

Pride is way more than just parades and parties. With Xfinity, pride is a year-round celebration — thanks to their massive collection of diverse, community-endorsed LGBTQ shows and movies. From a Transgender Awareness Collection of content, to RuPaul’s Drag Race Werk Room — to an LGBTQ Kids & Family Destination of TV shows and movies, you can find the best queer content on your TV just by saying “Pride” into your Xfinity Voice Remote, or watch them on any device with the Xfinity Stream app.

Aside from that, I run a queer theater company called Jaffe St. Queer Productions, which I run with one of my drag sisters, Lili St. Queer. Before the pandemic, we put on three full-scale parody musicals. We are working on our triumphant return to the theater. The theater is where I come from and I want to be able to provide opportunities, especially for trans and nonbinary performers like myself. Oftentimes if you’re a nonbinary person who has a soprano voice, you are going to walk into an audition and the directors are going to say you have to play a woman on stage. If you’re a nonbinary performer with a low voice, you’re going to walk in and they’re going to say, great, now you are only eligible for these men’s roles. Theater, which is a very queer art form, is surprisingly very set in its gender norms. Being able to change that over these past couple of years with Jaffe St. Queer, and being able to say, why can’t you cast people in the roles they were meant to play, aside from their voice parts, has been huge. Being able to take the gender norms out of theater is something that we’re very excited to bring back.

I really love the queer scene in Philly because in a lot of other cities, there is this level of competitiveness that gets in the way of people actually connecting. In Philly, I’ve always felt like there is enough to go around for everyone. There are so many different types of drag and queer preformance in this city. We have everything and it creates this setting for us to all be supportive of each other, for all of us to connect with each other and appreciate each other because we’re not always trying to compete with each other. The diversity of the scene here means there’s something for everyone and there’s a gig for everyone. The scene is expansive in a way that I don’t know exists everywhere. Like for me, I'm a bearded queen and there has yet to be a bearded queen on RuPaul’s Drag Race and there have been times where people have looked at me and said, bearded drag isn’t drag. That’s not necessarily something that happens with people who are a part of the scene here, but it is something that happens with people who look into the scene from the outside.

I think that people would be surprised to know that we are, for the most part, very supportive of each other. We are one big crazy drag family. We are all a part of something bigger and we all really care and respect the art form that we create. Philly has a great sense of community. That oftentimes comes first: Before the gigs and before the glamour, it’s really about the community here.