Watch 100 People Hilariously Fail to Eat a Spoonful of Cinnamon 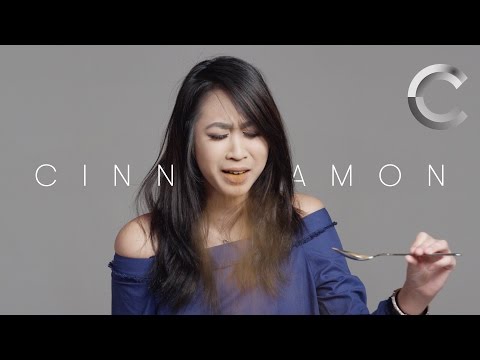 The internet loves a good food or drink challenge, and the cinnamon challenge -- wherein the objective is to down a spoonful of powdered cinnamon without losing your damn mind and spitting it out -- is a classic. As evidenced in a now-legendary viral YouTube clip from the comedian Glozell, in which she screams, shouts, huffs, and puffs while attempting to swallow a ladle full of the spice, it's not pleasant. That's probably because even just a teaspoon of the stuff will simultaneously burn and dry out your mouth to the point where breathing gets difficult. We don't recommend trying it at home yourself, but we do recommend watching these 100 brave souls attempt it on camera.

In the clip produced by the team at Cut, 100 people are filmed going through the various stages of the brutal challenge. Things start out slow while individually inspect their spoonful of powder, before cautiously sticking it in their mouth. Then, things get real, as the experience seems to progress -- and become increasingly intense -- for everyone at roughly the same pace. There's a lot of spitting, a lot of coughing, and many a dramatic plume of powdered cinnamon bursting from mouths. Eventually, they're handed a glass of water and their own "puke bucket," to put an end to the misery.

Amazingly at least two participants seemed to succeed by remaining mostly unfazed through the whole ordeal, but you'll have to watch to the end to find out who they are.