Smiling Volcano in Hawaii is Having a Really Good Time 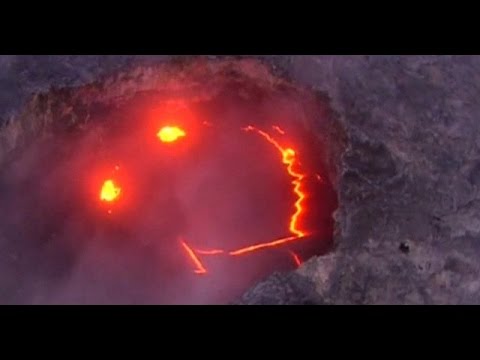 Nature is strange sometimes. The Kilauea volcano in Hawaii, one of the world's most active, is erupting right now. Lava from the volcano has started to hit the Pacific Ocean, as you see in the video above, for the first time since 2013 despite the fact that the volcano has been erupting continuously since 1983.

However, the most remarkable thing about Kilauea right now is that when Paradise Helicopters went up to get a bird's eye view of the action, the volcano looked like it was giving them a big smile. In a crater over 80-feet deep, the volcano appears to have erupted into a smile.

Hikers and tourists are currently able to get right up next to the lava, but the United States Geological Survey (USGS) recommends that visitors brings lots of water and be prepared for some extreme heat, as the hiker in the above video discovered. There's a unique viewing experience taking place with a flow that started on May 24 and just started getting to water on July 26.

The USGS also issued other warnings as people flock to see the volcano. "There are additional significant hazards besides walking on uneven surfaces and around unstable, extremely steep sea cliffs," the USGS wrote in a warning. "Venturing too close to an ocean entry exposes you to flying debris created by the explosive interaction between lava and water."

It's probably also worth mentioning that you shouldn't play Pokémon Go there. You'd just be inviting disaster.