Although he only just made his Olympics debut on Monday, figure skater Adam Rippon has already become a household name at the 2018 Winter Olympics in PyeongChang. The 28-year old openly gay figure skating star helped Team USA nab an early bronze medal and has been charming the masses with his delightfully sassy and witty personality. He's already delivered a number of highly quotable interviews, but his comments to reporters at a press conference on Tuesday ahead of his first singles competition on Thursday night (Friday, Korea time) is arguably his best yet.

Speaking about everything from where he gets his confidence, to what he suggests doing when you're depressed, he covered a lot of ground with the sort of entertaining aplomb people have come come to expect from the first-time Olympian. We've plucked some of the best snippets below.

"Nobody loves me as much as I love me; so I guess I’ll just be my own Valentine tomorrow."

“The other day I was joking to one of my friends. He was like, ‘You’re kind of everywhere right now.’ I was like, ‘I know; I’m America’s sweetheart.’ He laughed in my face."

On confidence (and Oprah)

“Sometimes when you’re not confident in yourself, to see someone who doesn’t care -- and I don’t care anymore; I really don’t care -- it gives you that confidence. I remember seeing people who I thought were so confident and exuberant. I remember being young and watching Oprah and being like, ‘Damn. That lady is so confident. She can talk to anybody.’”

On coping with depression

“To watch Mirai Nagasu go out there and also skate a clean free skate... I mean, we’ve really been through a lot together. Four years ago, we were eating In-N-Out on the roof of her house in Arcadia, California, and we were crying that we weren’t at the Olympics. And four years later, we’re sharing an Olympic podium together. So, if you’re ever depressed, go to In-N-Out, and four years later you’ll be at the Olympics!”

On the age difference between his teammates

“Vincent and I were born in different millennia. We were! I was born in the ’80s, girl... No electronics. No phone. The Berlin Wall came down when I was, like, born. The internet was, like, invented when Vincent was born. So we’re definitely different.”

On the haters and skeptics

“People have told me, ‘Oh, you’re a lot different than what I thought.’ I say, ‘Oh, what did you think?’ They’re like, ‘Oh, we just thought you were an ass.’ I’m like, ‘Oh… yikes.’ I’m just trying to share who I am, my personality... Sometimes I might meet people and they might just not like me, not want to get to know me. And that’s okay. They’re boring as hell anyway." 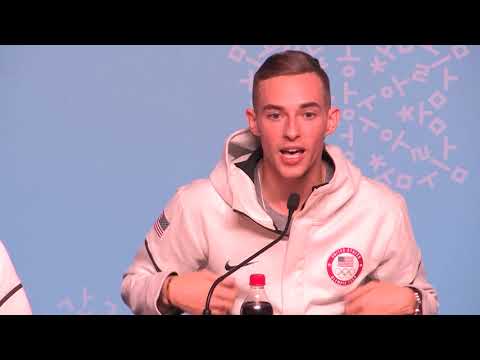 And though it may seem like everyone and their neighbor believes Rippon to be a national treasure, his rise to fame has not been without some backlash. During the same press conference, he addressed a bit of the controversy surrounding comments he made before arriving in PyeongChang about Vice President Mike Pence.

In a January interview with USA Today Sports, Rippon roundly criticized the decision to have the VP lead the US delegation during the opening ceremony, citing many anti-gay positions the former Indiana governor has taken over the years.

Pence's office responded by inviting the athlete to have a one-on-one chat with the VP, which Rippon declined. The VP also attempted to defend himself on Twitter.

At the press conference, Rippon said that he stood by what he's said previously, but regrets having it overshadow his time at the Games.

"I have no problem about what I've said because I stand by it, but I think right now the Olympics are about Olympic competition," he said. "It's brought a lot of attention to my other teammates and I don't want it to distract from them. I don't want my Olympic experience being about Mike Pence."

He added, "I can't tone it down. I'm being me and being myself... I've got so many messages from kids all over the country. I'm getting so emotional thinking about it. I think that's why it's so important."

Of course, if Trump, Jr. had been paying any attention at all to the goings-on between Pence and Rippon, he'd know Pence did indeed mention the athlete quite publicly by name just last week on Twitter.