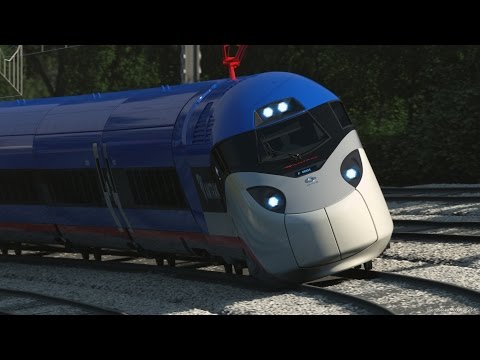 While Amtrak has long served as a generally cheaper travel option compared to flying, it has also served as a symbol of the nation's crumbling public transportation infrastructure. But there's a good chance that could change, thanks to a $2.45 billion loan from the federal government the company plans to invest in a huge fleet of new, high-tech and high-speed trains over the next few years.

As explained in a press release from Amtrak, most of the money will be spent on 28 next-generation high-speed train sets that will ultimately replace the current trains used for Amtrak's Acela Express service along the Northeast Corridor when they hit the tracks sometime in 2021. The slick new trains will travel at up to 160mph (although they max out at 184mph) and will feature better Wi-Fi (finally!), more outlets, USB ports, and reading lights at your seat, along with several other pretty badass specs detailed in the above video. Amtrak said the trains will also include "enhanced food service," although exactly what that means remains to be seen. Until then, you should probably continue to avoid the burgers.

Vice President Joe Biden, who's as famous for riding Amtrak as he is eating ice cream cones, recently announced the massive infusion of federal cash at his longtime home station in Wilmington, DE. Speaking of stations, the remaining funding will be used to finance much-need improvements at major Amtrak transit hubs like NYC's Penn Station and DC's Union Station along with infrastructure upgrades that will allow for the increase in high-speed train service, according to the press release.

With any luck, high-speed trains will roll out to other major Amtrak corridors across the country in the years after the forthcoming upgrade, but then again, it might be harder to enjoy all the gorgeous the scenery that way.

Tony Merevick is Cities News Editor at Thrillist and, sadly, has not been on an Amtrak train in a while. Send news tips to news@thrillist.com and follow him on Twitter @tonymerevick.
Thrillist TV
History of
The History of Tailgating