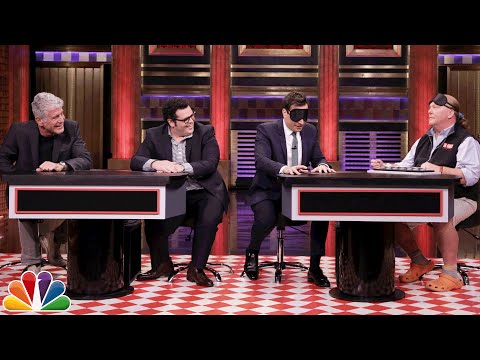 Though you’d probably like to see them in a cook-off, culinary masters Anthony Bourdain and Mario Batali entered another battleground last night: a food-themed Pyramid. That’ll have to do.

On Tuesday’s episode of The Tonight Show, host Jimmy Fallon and guest Josh Gad teamed up with Bourdain and Batali to play “Food Pyramid," a modified version of the game show once hosted by Dick Clark.

The game works like this: The contestants split up into pairs, with Bourdain and Gad on one team, and Fallon and Batali on another. Teams pick categories, and then one member of the team is presented with food or drink, which he must eat and then describe to his blindfolded teammate. The teammate then tries to guess the food/drink in question. Pretty simple.

Bourdain and Gad take an early lead with the alcohol category. No surprises there. Gad even guesses “Vodka” before Bourdain says anything. It’s like he has a vodka sixth sense. But Batali and Fallon fight back to tie it up.

To see who wins the final tie-breaker round, you’ll have to actually watch the video. No more spoilers for you.

Kara King is a News Writer at Thrillist and takes issue with Crocs. Send news tips to news@thrillist.com and follow her at @karatillie.