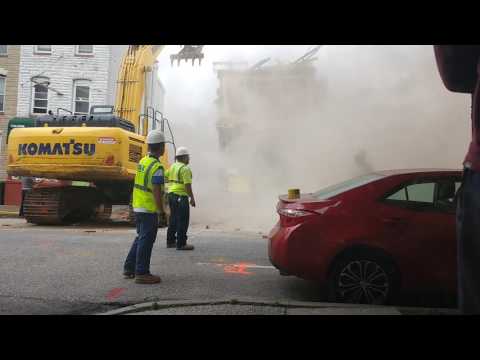 Welcome to a demolition crew’s worst nightmare. On Sunday afternoon, city contractors in Baltimore worked to tear down a condemned row house with an excavator, but accidentally destroyed the neighboring building. The whole thing comes crashing down in a flurry of dust and rubble, as bystanders watch in disbelief.

The demo crew meant to tear down the original building at 212 E. Fort Street because of a massive crack in the wall. But everything went terribly awry, as a hefty layer of brick toppled over onto the building next door. No construction workers were hurt, luckily, as the mixture of brick, concrete, wood and other detritus made for a dangerous scene.

The owner of the mistakenly wrecked property -- a former pet store called the Laundry Mutt -- was surprisingly undisturbed by the botched job. Joseph Rene, who bought the building for $160,000 cash with the plan of turning it into a three-level home, told the Baltimore Sun: “We’ll rebuild it...we have no other option.” Other onlookers from the street were audibly shocked, blurting obscenities.

Buildings attached to condemned properties are rarely affected by demolition projects, Baltimore Housing Department spokeswoman Tania Baker said in a statement. "If a property presents an imminent danger, Baltimore City will take whatever action is necessary to protect the public, including emergency demolition," she said. K&K Adams, the contractor tasked with the job, declined to comment when contacted by the paper.

While obviously an embarrassing accident, the contractors now have more in common with teenage vandals than they’d probably like to admit.