Baskin-Robbins' Carvable Turkey Ice Cream Cake Is Back for Thanksgiving

Savory foods and ice cream cake generally don't mesh well, but Baskin-Robbins' elaborate Turkey Ice Cream Cake makes it work... kind of. If anything, the chain's frozen Thanksgiving dessert looks too much like a roast turkey, something most people don't expect to see when they walk into a dessert shop.

The novel Turkey Cakefeeds eight to 12 people and can be found at Baskin-Robbins stores nationwide through the month of November. The suggested retail price is $32.99, but it's worth noting that it can run higher in some locations. It features a caramel praline "glaze," two sugar cone "legs," and a bed of frosting "garnish" to really sell the look. (Thankfully, the recipe doesn't call for any actual turkey.)

For jokesters, it's a great Thanksgiving dinner gag. For vegetarians, it's a yummier alternative to tofurkey. And for Baskin-Robbins cake decorators, we can only assume it's a nightmare. In any case, it's a head-turner that's stirred up conversation since it debuted in the '70s.

Since all cake-cutting rules fly out the window with a dessert this funky, Baskin-Robbins even created a tutorial on how to "carve" into its masterpiece when the time to feast arrives. 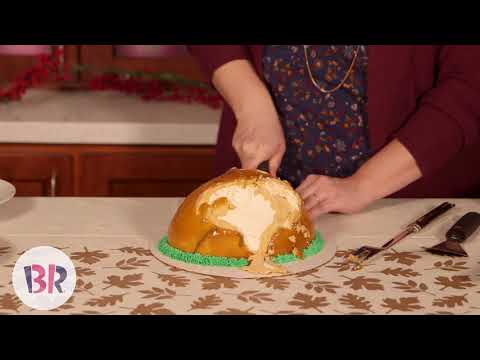 Baskin-Robbins' other November holiday treats include Pumpkin Cheesecake Ice Cream, filled with gingersnap pieces and cinnamon cream cheese, and the Harvest Swirl Cake, made with your choice of cake and ice cream and topped with bright leaves and pumpkins.