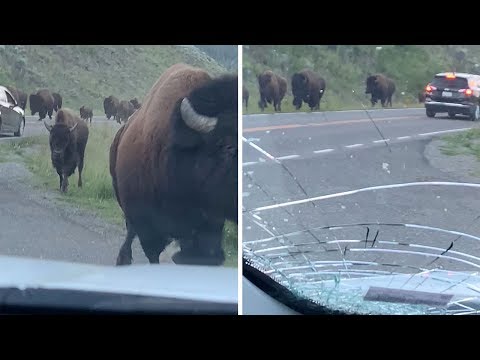 America's National Parks are incredible open spaces worth protecting. There are tons of reasons why this is true, and they don't all need to be listed here. However, among them is the opportunity to see things you'll never see during your daily routine. That includes seeing a stampeding herd of bison.

The Delle Chiaie family got to see that firsthand on a trip to Yellowstone National Park. They were on the road as the herd began to move, causing traffic to come to a standstill. It's a magnificent sight. (Even if it's nowhere near the unimaginably huge herds that once roamed the country before they were slaughtered.) Though, by the end of the video the dad, Bruce, seemed slightly less interested in the majesty of the bison.

Bruce, along with his wife and three children, were in the car as one bison in the herd rammed into it. It didn't seem like a particularly aggressive blow from the bison, but the massive animal was able to inflict some serious damage nonetheless.

The collision shattered the windshield and caused other damage to the car. Even worse, it was a rental car and, as you can hear in the video, the family didn't get insurance. If they didn't have the video, it'd be a hard one to explain to the rental company.