The Way This 6-Foot Robot Moves Is Pure Nightmare Fuel 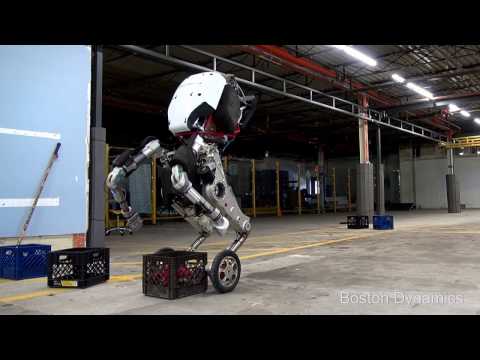 Just a few weeks ago, leaked video revealed the latest robotic monstrosity from the maniacs at Boston Dynamics, or as you may know them, the people who unleashed the terrifying horse-like robot that gallops through your worst dystopian nightmares. Now, the engineering and design company has officially introduced the all-new robot and, well, it's scary as hell.

The demonic contraption is innocuously called Handle, and Boston Dynamics describes it as a "research robot" that stands 6.5ft tall, can lift 100lbs, and jumps up to 4ft high. The machine combines both wheels and legs, allowing it to go almost anywhere at speeds of up to nine mph and up to 15 miles on a single battery charge, according to the company. But as you can see in the video above, the way it glides, jumps, and maneuvers over obstacles is unsettling, if not creepy. It's also insanely impressive.

Exactly what such a robot could be used for remains to be seen, but judging by the way Handle can spin on its wheels, some sort dancing or choreography-heavy entertainment seems practical. Either that, or serve as our evil tech overlords someday. Or something like that.

Tony Merevick is Cities News Editor at Thrillist and would love to see this thing play sports of some sort. Send news tips to news@thrillist.com and follow him on Twitter @tonymerevick.
Thrillist TV
History of
Our Newsletter