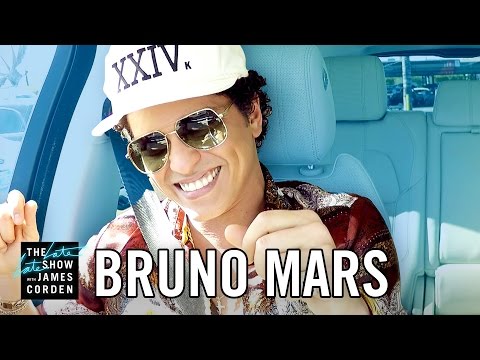 After a bit of a dry spell with no "Carpool Karaoke," it's been a big couple of weeks for James Corden's best-loved segment. Last week he brought a game Madonna along for a ride.

This week, Bruno Mars made his "Carpool Karaoke" debut on The Late Late Show With James Corden. They do the hits — including "24K Magic" and "Uptown Funk" — and Corden even gets Mars to do a little a cappella Elvis.

During the drive, they address the elephant in the room: That Mars seems like a happy guy. "If I was wearing that level of silk I would think I'd be happy as well," Corden says. "[But] if I wore that, I'd look like I was having a breakdown."

There's also a wonderful moment in the middle of the segment where Mars essentially tries to teach Corden how to dance sexy and the self-aware comedian turns it into an awkward moment while looking like he's trying really hard. "All that song teaches me," Corden says after they sing "Versace on the Floor," "is that you and I are very different in the bedroom. Because, I mean, if I start bringing out those sorts of shoulder moves I think I'd be living on my own."

Mars is a great guest for the segment. Though, he's no Kanye West, which Corden has promised will happen eventually. But Yeezy is pretty busy meeting with the President-elect and what have you. Until then, this is pretty damn fun.