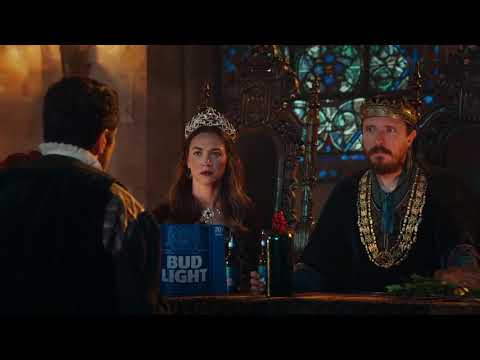 Throughout the fall and winter of 2017, you couldn't escape Bud Light's "Dilly Dilly" commercials -- or its pervasive catchphrase -- if you tried. The commercials were ubiquitous. Populated by people in a medieval court raising bottles of Bud Light and cheers-ing "dilly dilly," the ads confused about as many people as they've made laugh.

The ad campaign centers around a fictional Game of Thrones-esque universe and the phrase "dilly dilly." Once the ad launched, the catchphrase caught on and, almost a year later, it doesn't appear to be going away anytime soon. It started with the commercial above but expanded quickly into a world with more nearly a dozen commercials running constantly during broadcasts for the NFL, college football, March Madness, and, soon, the 2018 World Cup in Russia.

The series now includes the below spot that debuted on December 10, a trilogy of ads leading up to the Super Bowl in Minneapolis on February 4, and a recently launched bilingual campaign teasing Bud Light as the official sponsor of the 2018 World Cup. It's one of the most omnipresent campaigns in recent memory. So, what the hell does "dilly dilly" mean and why did something so ridiculous catch on in such a big way?

What Does "Dilly Dilly" Mean?

The commercials have made plenty of people ask the question. Is it some form of medieval terminology you slept through in history class? Did someone forget how to say dilly dally? Is it the boss new lingo all the kids are saying and you've finally aged out of understanding slang?

The Oxford English Dictionary defines dilly as "an excellent example of a particular type of person or thing." Merriam Webster has also chimed in, noting dilly "comes from an obsolete adjective meaning 'delightful.'"

Those definitions resonate with what's happening in the commercials. However, that's not exactly what the ads are after. "The dictionary definition of the word differs from our definition slightly, but to us, it was a sort of medieval form of 'cheers,'" Andy Goeler, VP of Bud Light, tells Thrillist. "The phrase has taken on a life and a meaning of its own, thanks to fans of the commercials -- and we're more than happy to just be along for the ride."

Miguel Patricio, Chief Marketing Officer of Anheuser-Busch InBev, leaned into its nonsensical side when talking with Business Insider. "'Dilly Dilly' doesn't mean anything. That's the beauty of it," he said. "I think that we all need our moments of nonsense and fun."

It kind of means whatever you want it to mean, which is why you've likely seen it used in a variety of ways on social media, in conversations, or the impossible-to-read stream of comments on HQ Trivia. "After we launched 'Banquet' [the first commercial] we began to see sports fans, media, wedding guests and people all over social media using the phrase organically on their own," Goeler said, "with signs on College Gameday, tweets, on-air broadcast mentions, and even Ben Roethlisberger of the Pittsburgh Steelers calling a 'Dilly Dilly' audible."

That's just the tip of the medieval iceberg. The ads have inspired a Christmas light display and made a taproom-only beer from Modist Brewing go viral when Bud Light sent a medieval town crier to deliver a creative cease-and-desist. Months after it seemed to peak at the Super Bowl, it's still lingering after Augusta National banned fans from saying "Dilly Dilly" during The Masters tournament. The catchphrase is still pretty much everywhere, whether you like it or not.

Though the agency says it's nonsense, the phrase "dilly dilly" isn't without history. It appeared in a 1949 folk song by Burl Ives called "Lavender's Blue." That song was reprised for Disney's live-action Cinderella in 2015. The agency told the New York Times it was unaware of the song when it concocted the catchphrase.

Goeler says he hopes people who enjoy the commercials drive the future of the Wieden+Kennedy ad agency-created spots. "With 'Pit of Misery' and 'Handouts' [released December 10] we’re expanding the 'Dilly Dilly' universe," Goeler says, "but this phrase is ultimately up to the people to decide how long it is relevant. We’ve been very lucky and very careful about how much we push the phrase, so we’re going to see how things play out. We are just happy that we’ve created something that’s fun, humorous and has some cultural value."

Bud Light and Budweiser have created many iconic commercials -- the Budweiser frogs or Bud Ice's "Doobie Doobie Doo" penguin -- but "Dilly Dilly" wind up being it's most long-lasting and far-reaching endeavor.

Bud Light has announced plans to culminate the current trilogy of "Dilly Dilly" commercials with a 60-second ad at the Super Bowl. (That does not mean it's necessarily the final commercial in the world of King John Barley IV.) The finale of the Barley's war focuses on a new character called The Bud Knight who may or may not be a hero of the realm. (At least, he's more invested in getting to a party than he is in being a hero.)

With the premiere of this ad, Bud Light will have released a total of seven commercials focused on the king who values beer above all else. In addition to those commercials, there were online-only promotions specific to each of the teams that made it to the NFL's conference championships, "Dilly Dilly" prop bets, a Bud Knight appearance on The Today Show, and a fanbase who has taken "Philly Philly" as their own. (Well, that, dog masks, and climbing lubed-up light poles).

It's safe to say that if you felt the phrase was inescapable during the NFL's regular season, you might be surprised how many more times you'll hear it in the days surrounding the Super Bowl. That's especially true if you count instances of "Philly Philly" or Dietz & Watson's obvious troll of the ads, "Deli Deli." Not to mention the moment when a huge crowd of people chanted "Dilly Dilly" shortly after Punxsutawney Phil revealed his winter forecast at the official Groundhog Day celebration ceremony -- of all places. Oh, and just when you thought "Dilly Dilly" couldn't spill over into our culture any further, Bud Light execs and costumed actors from the commercials took over the New York Stock Exchange and yelled the phrase from the institution's iconic balcony at The Closing Bell on Friday. They even brought beer and prop swords. Really. That happened in real life.

All said, it looks like -- for better or worse -- we have finally reached peak "Dilly Dilly." If you love the catchphrase, soak it in while you can. It's the end of football season and probably the end of "Dilly Dilly" commercials, for now. The trilogy has come to an end, but Bud Light has stopped short of saying that this is the end of "Dilly Dilly" altogether. If people are still saying it next season, don't be surprised if the king, the wizard, the weird guy with the bowl cut, and his knights of the round dilly bring the realm back to your realm.

Sign up here for our daily Thrillist email, and get your fix of the best in food/drink/fun.
Dustin Nelson is a News Writer with Thrillist. He holds a Guinness World Record but has never met the fingernail lady. Follow him @dlukenelson.