Budweiser's Super Bowl Commercial Is a Powerful Story About Immigration 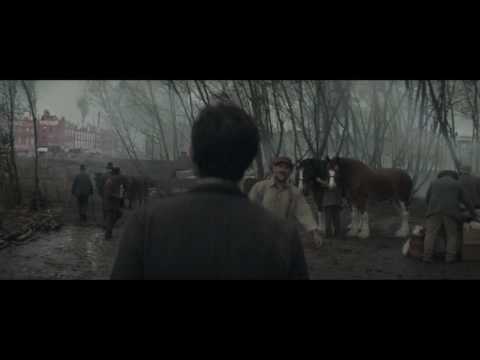 Massive protests at major airports, legal challenges, condemnation from the tech industry and elsewhere -- the backlash against President Donald Trump's executive order banning immigrants from seven majority-Muslim countries continues to grow around the world. That's why it may be surprising -- if not particularly curious -- that Budweiser released its new Super Bowl commercial on Tuesday, featuring a powerful story about none other than immigration.

The one-minute commercial, "Born the Hard Way," tells the (condensed) tale of Anheuser-Busch's co-founder, Adolphus Busch, who emigrated to the United States from Germany in 1857. After making the difficult voyage across the Atlantic, the then-18-year-old Busch is met with anti-immigrant insults like "You're not wanted here" and "Go back home." But, eventually, he makes it St. Louis, where none other than one Eberhard Anheuser buys him a beer... That's about all the story they could fit in the ad, but you get the point: it's about the American Dream, which of course, is a concept largely exemplified by immigrants. Oh, and it's also meant to sell lots of Budweiser.

So, what about the curious timing? Well, Anheuser-Busch InBev claims it's totally a coincidence and that it's in no way a response to Trump's divisive Jan. 27 executive action, according to a report by the St. Louis Post-Dispatch. In fact, the spot was filmed earlier this month and planned many months before that, but all timing aside, the commercial sends a powerful -- and positive -- message about immigration. Execs at the company will at least admit to that.

"It’s true, Adolphus Busch made an incredible journey to this country, and that’s really what this is about. It’s about his vision, his dream, everything that he doest to achieve that," Budweiser Vice President of Marketing Ricardo Marques told Adweek. "Even though it happened in the 1850s, it’s a story that is super relevant today. That’s what we’re honing in on; it’s the pursuit, the effort, the passion, the drive, the hard work, the ambition, that’s really what this is about more than anything else."

Anyway, go ahead and watch it for yourself. Spoiler alert: there are no Clydesdales.

Tony Merevick is Cities News Editor at Thrillist and finds this fascinating. Send news tips to news@thrillist.com and follow him on Twitter @tonymerevick.
Our Newsletter