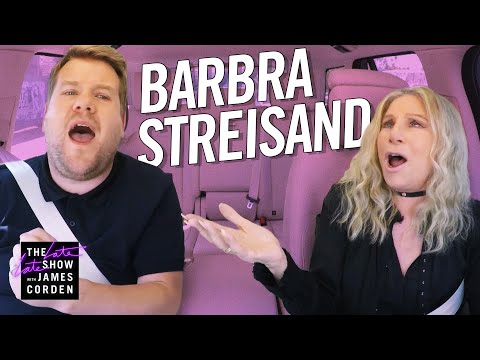 On Halloween, it almost seemed like Corden was going to do a reprisal of his "Carpool Karaoke" with Ariana Grande, but instead, the pair hit up to a haunted escape room. If you were really looking forward to getting one of Corden's iconic segments this week, he hasn't let you down.

During Thursday's episode of The Late Late Show, he did "Carpool Karaoke" with Barbra Streisand. He flipped the script on it a bit and had the legendary singer and actress behind the wheel while he was riding shotgun. (A lot of the conversation revolved around her poor driving skills and having to recently get her license renewed.) They sang a mix of classic songs and some from her new album, Walls, even though she claims she has never sung out in the car like this before.

Like with all of the best "Carpool Karaoke" segments, Corden looks like he's genuinely thrilled to be singing a duet with the guest. (And even addressed it in their conversation.) It may lack the weirdness of others when Corden gave piggyback rides, rode helicopters and roller coasters, or helped the Red Hot Chili Peppers save a baby's life.

On the upside, doing the staged segment didn't make Streisand any less herself. She stopped in the middle of a song to let Corden know he got a lyric wrong. Totally fair.


Dustin Nelson is a News Writer with Thrillist. Follow him @dlukenelson. dnelson at thrillist dot com