Here's How the Chicago River Is Dyed Green for St. Patrick's Day

There are plenty of ways to celebrate St. Patrick's Day, and we recommend picking the best one for you. Try to find a four-leaf clover, indulge in some corned beef, or even watch those bizarre Leprechaun horror movies...

There are plenty of ways to celebrate St. Patrick's Day, and we recommend picking the best one for you. Try to find a four-leaf clover, indulge in some corned beef, or even watch those bizarre Leprechaun horror movies. Preferably don't reduce yourself to basic motor functions through consumption of Guinness and offensively stereotype a vibrant culture, but it's your life.

There's one tradition, however, that we all agree is a great time: watching the Chicago River turn green on St. Patrick's Day. It looks as cool as it looks concerning, and it's good, old-fashioned, family-friendly, non-offensive fun. And it's a tradition that's over a half a century old, so there are probably a few things you don't know about it.

Here's how they get it done, and how it came to be.

When is the Chicago River dyed green?

You can read all about all of the Chicago St. Patrick's Day festivities here, but in the short, the dyeing of the river will start at 9am on Saturday, March 16. Tourist boats, however, should be loading up around 8am. Once it's dyed, the river will stay green for around 24 to 48 hours. The Chicago Plumbers Union has been coloring the river since 1962, when Chicago Plumbers Union business manager Stephen Bailey originally had the world-famous idea.

How does Chicago dye the river green?

Basically, the Plumbers Union pours a crazy amount of what's more or less food coloring into the Chicago River. As to what's in the color, well, it's a secret recipe the plumbers originally developed to trace leaks in buildings. But it supposedly won't kill anyone/anything despite it making the water look like nuclear waste. A crew from the Plumbers Union uses two to three motorboats -- one or two large ones with the dye and a smaller one to churn up the water -- to unleash the dye, which sets in over the course of about 45 minutes.

How many gallons of green dye are put into the Chicago River?

For the noble cause of turning this mighty body of water snot-colored, the Plumbers Union pours in about 40 pounds of the powdered dye (which is actually orange until it's mixed in). Fun fact: The crew once used 100 pounds back in 1962, and the river was green for an entire week. After that, they lowered it to 25 pounds, and it's now back up to 40 as the recipe has been perfected. It's unclear what changed, as, again, the recipe is a secret, but the Plumbers Union does maintain that the concoction is environmentally friendly, so rest easy.

How much of the river will be dyed this year? 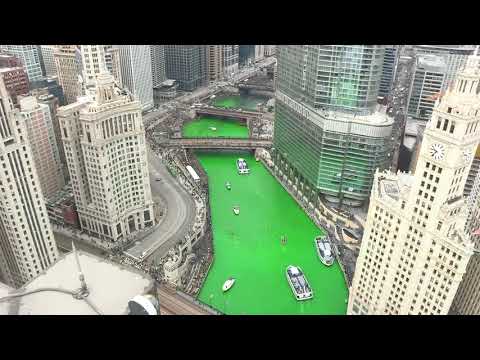 KRIS 6 News
Sign up here for our daily Thrillist email and subscribe here for our YouTube channel to get your fix of the best in food/drink/fun.
James Chrisman is a News Writer at Thrillist. Send news tips to news@thrillist.com and follow him on Twitter @james_chrisman2.