The innovation lab in Brussels just completed its first-generation prototype.

Coca-Cola has made progress toward developing fully recyclable packaging, according to a recent revelation from its Brussels innovation lab. After conceptualizing a new bottle design with sustainable bottling company Paboco, Coca-Cola gave us a glimpse of its first-ever paper bottle prototype.

The beverage company's research and development team has been focusing on sustainability lately as part of its World Without Waste initiative. The environmental program aims to dramatically reduce Coca-Cola's footprint over the next 10 years. Its 2030 goals include collecting and recycling one bottle or can for each one that's sold, limiting the use of virgin packaging materials, and only using packaging that can be recycled in its entirety.

The first-generation paper bottle prototype is 100% recyclable, but it isn't 100% paper. Creating a structurally sound bottle that doesn't contain some plastic is a big feat, one that the Brussels lab is still working on. Still, this mostly paper prototype is promising.

“Our vision is to create a paper bottle that can be recycled like any other type of paper, and this prototype is the first step on the way to achieving this," said Stijn Franssen, packaging innovation manager for Coca-Cola's Europe, Middle East, and Africa regions, in a statement. "A paper bottle opens up a whole new world of packaging possibilities, and we are convinced that paper packaging has a role to play in the future."

Some customers may be concerned about the functionality of a paper bottle. We've seen how soda can turn paper cups soggy, and we've fallen victim to paper straws that tear after a few sips. Coca-Cola's innovators are aware of those challenges, and like any other glass or plastic bottle, their product will undergo extensive testing to ensure that it protects the drinks inside, maintains its form, and holds up in a refrigerator.

“We also reflect on how our consumers will react to this paper bottle. Topics like when and where it could be sold and how it can be recycled are all considered," said Franssen. "The bottle must be explored from every perspective to ensure that we make the bottle the best it can be."

The paper bottle prototype is just that right now—a prototype—but Coca-Cola is optimistic that it will find a way to incorporate versatile paper packaging into its portfolio in the future.

Take a look inside the innovation lab below. 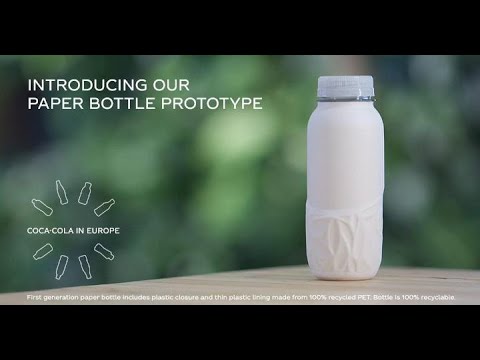