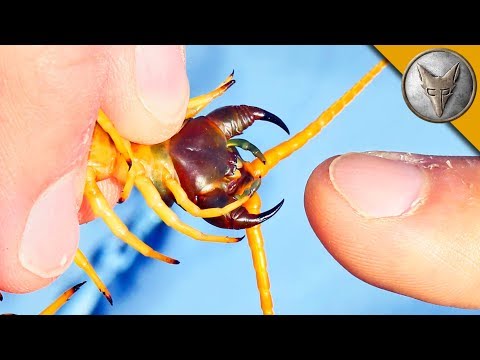 Coyote Peterson has made a name for himself in part because he's been stung and bitten by some frightening things in the name of education. The naturalist has worked his way through the Insect Sting Pain Index and even took time to interview entomologist Justin Schmidt, who is largely responsible for the research behind the index.

Peterson has been stung by the tarantula hawk, he's been bitten by a snapping turtle, had his face covered in bees, and even took on the poison of the lionfish. In a new video, he faces a massive centipede. "The giant desert centipede is the one animal that I always thought to myself, 'You know what? I never want to be bitten by that creature,'" Peterson says. "But I have climbed the insect sting pain index and I feel, when it comes to bites, this has got to be the last one."

The giant desert centipede appears to be a bite, but it's actually a pinch from a pair of modified hollow legs near the centipede's head. When the centipede pinches, it injects venom that causes intense pain. It has been described as feeling like nothing more than a honeybee sting and, at the other end, as Peterson says, it "could potentially rot a hole in [his] arm." For Peterson, it was the latter. It looks horrible, even though the giant desert centipede isn't known to cause death in humans.

Nonetheless, from Peterson's writhing, it's clear this is an intensely painful experience. "This is so much worse than a bullet ant sting," he yells while rolling on the ground. "This just absolutely eclipses all the insect stings I have taken." The video ends with a bit of a cliffhanger, with Peterson asking for the cameras to be cut. We'll update this post with the second video when it's released.

To boot, that's an ugly looking centipede, which might induce fear based on its size alone. They can get up to eight inches long. You probably were planning on avoiding them even before you saw how painful the pinch can be.

Sign up here for our daily Thrillist email, and get your fix of the best in food/drink/fun.
Dustin Nelson is a News Writer with Thrillist. He holds a Guinness World Record but has never met the fingernail lady. Follow him @dlukenelson.
Thrillist TV
History of
The History of the McRib