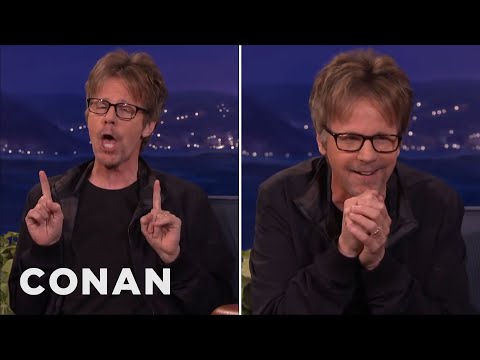 While you may know Dana Carvey mostly as the Garth to Mike Myers' Wayne or one of his many classic SNL characters like the Church Lady, he's also famous for being an impression machine. And now, as he promotes his aptly titled new show, First Impressions, he's finally applying his talents to an area where we arguably need them most: the 2016 election.

On Tuesday night, the 61-year-old comedian sat down with Conan O'Brien to talk about the new show, and it didn't take long before he unleashed his own take on what Conan called "the impression of the year," Donald Trump. Unsurprisingly, Carvey didn't do any old Trump impression, instead creating a post-apocalyptic President Trump with lines like, "You know, we had a fabulous nuclear war -- it was fabulous."

As for Bernie Sanders, Carvey was quick (and right) to admit that Larry David reigns supreme with his insanely good impressions on SNL, but explained that his own version is based on the senator's apparent cadence of three or four words at a time. Carvey stands up for this one, and of course, does a lot shaky finger wagging.

Although his Trump and Sanders impressions are the main attractions here, he also does a pretty funny Bill and Hillary Clinton towards the end of the clip. By then, you might just feel a little better about the state of our politics. Might.

Tony Merevick is Cities News Editor at Thrillist and does a really bad Bernie Sanders impression and won't even try to sound like Trump. Send news tips to news@thrillist.com and follow him on Twitter @tonymerevick.
Our Newsletter