Space, as you may have heard, is the place. There's a whole lot of crazy stuff up there to see, and, let's be honest with ourselves, how often do we take advantage of the free light show? The celestial phenomenon we probably take most for granted is the humble moon. While she might be a bit shyer than her older sister the sun, once a month she shines like a protagonist who's switched from glasses to contacts in a '90s teen comedy. And luckily for us, this Sunday, December 3 is basically moon prom, when we'll have the rare pleasure of seeing a huge, extra bright supermoon.

What is a supermoon?

A supermoon occurs when the moon is both full and near its perigee (the point at which it's closest to Earth in its orbit) and appears 14% larger and 30% brighter than normal, so you won't want to miss it. Since the moon makes its trip around Earth every month, the perigee happens once a month too. A supermoon will only happen, however, if the perigee also aligns with the full moon, which is fairly uncommon since the moon's orbit isn't perfectly circular (it's elliptical). The moon was actually closest to Earth on May 25, but because the moon was in a different phase, we didn't get a supermoon.

The moon has an average distance of 238,000 miles from the Earth, but at its perigee this week, it'll be only 222,135 miles from Earth. That's not exactly close enough to touch, but it'll make a big difference to the naked eye. 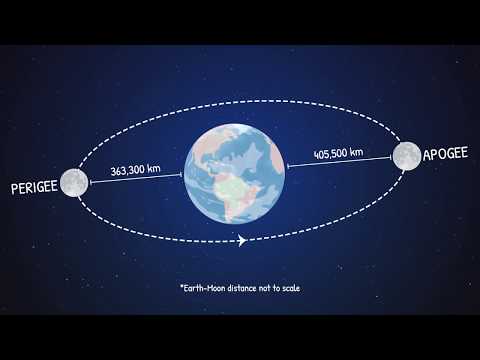 When is the supermoon?

The moon will be totally full at 10:47am EST this Sunday, December 3, and the perigee will happen on Monday, December 4, at 3:45am EST. But these times don't need to align exactly; the overlap will be enough all night to blow your mind.

If you live in New York City, the full moon will rise (this'll be when it looks largest) on December 3 at 4:59pm EST, and in Los Angeles that'll be 5:17pm PT. But as long as you're getting outside after 5pm, you'll have a great view of Her Luminousness. Unfortunately, the sun won't be visible at the same time as the moon in North America on Sunday, but this night isn't about the sun so let's just focus on the good qualities the moon has for a second. Also note that though the moon is only technically full on December 3, it'll appear full the night before and after to us normies. Winter supermoons also tend to look larger than other supermoons.

The last supermoon occurred on November 14 of last year, but there's another one coming up in January and one in February too.

Get outside and look up: It's gonna be hard to miss.


James Chrisman is a News Writer at Thrillist who is not sure if he really believes in the moon. Send news tips to news@thrillist.com and follow him on Twitter @james_chrisman2.