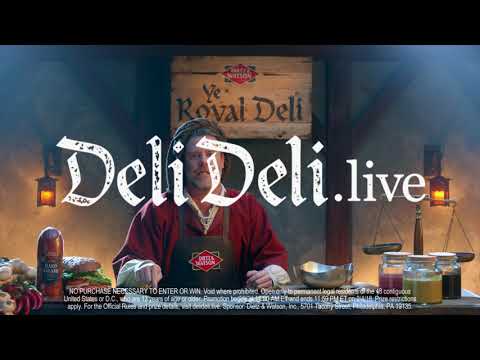 "Deli Deli" is the new Super Bowl slogan for the decidedly non-medieval meat and cheese purveyor Dietz & Watson. In an obvious troll of Bud Light's "Dilly Dilly" commercials, the Philadelphia-based meat slinger is creating its own, very temporary medieval universe for the day of the Super Bowl.

The company has launched a cheeky commercial to promote its "Deli Deli"-themed Super Bowl pop-up, which you can see above.

With the Eagles in the Super Bowl, its dog mask-wearing fandom will need sustenance for all the cheering, nail-biting, and attempting to climb lubed-up light poles. To help the denizens of Olde Philly, Dietz & Watson have set up Ye Royal Deli where you can score a free sandwich if you're in a market that gets Amazon Prime deliveries via Amazon Fresh.

Ye Royal Deli will open for business at 11am on Sunday, with an attendant taking orders via a ten-hour live stream of Ye Royal Deli that can be seen on Facebook, Twitter, and Youtube. (It can also be seen below.) Locals looking for a sandwich can jump into the melee by placing an order in the video's comment section. Then watch as your loyal butcher slices a quarter pound of your preferred meat and cheese with Ye Olde Deli Slicer. There will also be a contest awarding one customer free meat and cheese for life.

The orders will be doled out through Amazon Fresh in the 37 markets the company serves. Though, select local orders in Philadelphia will be sent by medieval courier on a bike or motorbike gussied up as a filly. Philly Philly.

Dietz & Watson
Check out the best bars to watch Super Bowl LII in Boston, Chicago, Las Vegas, Los Angeles, Minneapolis, Philadelphia & San Francisco.
Sign up here for our daily Thrillist email, and get your fix of the best in food/drink/fun.
Dustin Nelson is a News Writer with Thrillist. He holds a Guinness World Record but has never met the fingernail lady. Follow him @dlukenelson.
Our Newsletter