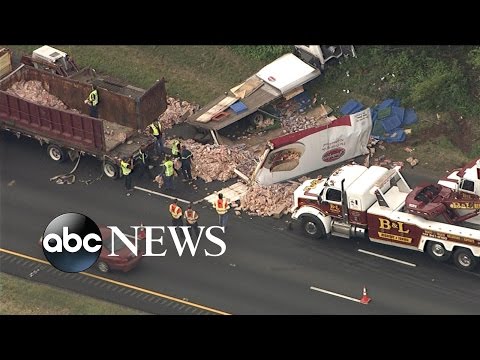 Big piles of deli meat and fresh slices of bread were basically created to collide -- on sandwiches, of course. However, a recent crash involving a deli meat truck and a bread truck appears to have taken the timeliness combination to an insane new level, creating a giant accident sandwich all over a New Jersey Highway.

The collision spilled hundreds of packages of bread and deli meat products all over the road, and resulted in massive traffic delays while crews cleaned up all the sandwich ingredients. Luckily, nobody was injured in the incident, which occurred early Friday morning on Interstate 287 in Piscataway, New Jersey, according to a report by NBC 4 New York. The mess was so huge, authorities called in fast-food sandwich makers from all over the state to slap together meals for drivers stuck in traffic. OK, just kidding. They actually just threw it all into dump trucks. ¯\_(ツ)_/¯

Of course, this isn't the first time food trucks seemed to fittingly collide. Earlier this year, a truck carrying beer and a truck carrying potato chips collided, causing a giant, sudsy mess on a Florida highway.

Tony Merevick is Cities News Editor at Thrillist and would love to have seen this in real life, and is glad nobody got hurt. Send news tips to news@thrillist.com and follow him on Twitter @tonymerevick.
Thrillist TV
History of
The History of Tailgating